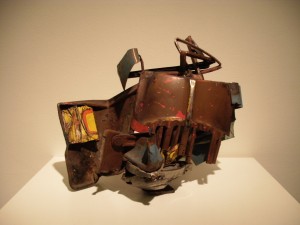 The sculptor John Chamberlain has been around since the early ’60s. He had a corrugated-steel piece sitting on the floor of Andy Warhol’s original Factory, and he had one prominently on display at Max’s Kansas City right through the heyday of the sex, drugs and music.

The artist recently surprised onlookers by leaving Pace, his gallery of 20 years, and moving to Gagosian–though he had done a show for art financier Ernest Mourmans in Switzerland last summer, so he may have been a “free agent” for a while. Somehow, Steven Henry of the Paula Cooper Gallery anticipated the move and has mounted an impromptu Chamberlain show through April 2, so now is a good time for collectors to see the elegant if somewhat modest show, and rethink and reassess the 83-year-old’s work.

So many factors come into play when considering a career that spans more than 50 years. When I learned that the great Donald Judd dedicated an entire building to his own fabulous collection of about 20 Chamberlain sculptures, I realized that this was a career of real historical gravitas, one that had lost its mojo in the art market of the past decade.

I’ve often heard Mr. Chamberlain referred to as an “Abstract Expressionist” sculptor (think of Willem de Kooning or Franz Kline brush strokes, but done instead with slices of bent car doors and bumpers). But he came later, and I find him more masculine, raw and kind of raunchy. The concept of the car, and the car crash, is such an quintessentially American image that I can’t help but think of him as a Pop artist, or at least one who falls in between the Abstract Expressionist and Pop concepts; perhaps that’s why he’s never fit into the tidy little box that many collectors need. In an early interview, he refused to be categorized as the artist of the “car crash” and said that his contemporary Claes Oldenberg best understood his work when he said that his colleague made “hard things soft.”

Of course, every great artist is too clever to let himself be pigeonholed and categorized, but today, in the age of Richard Prince car hoods, the Bruce High Quality Foundation’s ambulance, Nate Lowman’s hubcaps or Dan Colen’s pile of Harley-Davidsons, there is no doubt that John Chamberlain’s work is a reference we will find over and over again. He is also an artist to be found in just about every museum in America. So, then, why did his career appear to go so cold for the past several years?

While every artist’s career is different, there are defined  patterns the market follows in valuing the work. The early breakthrough pieces are most often the acknowledged best: Most artists have a fresh moment of discovery that may last as long as a decade. But they eventually fall into a rhythm, which can eventually look like a routine. Though the galleries keep a commercial market for their output chugging along, from a curatorial perspective, most of the work in the middle can look gestural or mannerist, and often ends up looking decorative. Then, a resurgence of interest occurs close to the end of an artist’s career. Think of prices for Picasso, de Kooning, Warhol and so many more. It is a part of the very nature of the art-making/selling process. Artists will inevitably recede from the spotlight as newer, fresher talent takes their podium space, and then the good ones will inevitably return for a grand finale with a flourish and a bang. Amid this pile of half-truths and clichés, one thing is for sure: Mr. Chamberlain will be in every single art-history book you ever pick up. He has produced many different types of the same work, not unlike a Robert Ryman or a Donald Judd, and though he has always used bent metal in his “process,” he is far from a one-hit wonder. He went from crushing and welding doors and bumpers and corrugated steel in the ’60s to using the metal to make gaudy-looking painted monsters in the ’80s; the process evolved into using multicolored strips of van roofs in the ’90s. I’m certain that all of it will look good in the near future, and even though some of the bright colors may look dated today, they’re definitely funky. With Mr. Chamberlain, the classic “only buy the early work” conservatism doesn’t work; he has created a whole range of options and explorations.

Does a change of gallery assure that prices will adjust to where they should be? Absolutely not; as a matter of fact, L+M did a great Chamberlain show just after the crash that suffered only from bad timing. Though some of the works sold, for the most part, the market didn’t budge. But today collectors are looking for historical value; they want to invest in art that is proven.

Fresh eyes and the new context of a different gallery will provide a catalyst for the reevaluation of Mr. Chamberlain’s works. If you own one, it’s a very good thing; if you don’t, now may be the time. Most collectors can’t afford to buy Abstract Expressionism (de Kooning, Pollock, Smith, Rothko, etc.), and great Pop Art is generally out of reach. That’s why we have to overpay for today’s big names or tomorrow’s promising young talent. Value opportunities like this one are few in today’s super-efficient market, but they are important, because the artist deserves the recognition, and because collectors shouldn’t only be chasing the next hot thing.

I overheard a respected curator gripe that artists jump from one gallery to another just to cash a check and flatter their egos. Some of this has to be true, but when you’re in your 80s, perhaps things take on a different meaning. You can’t really spend all the money, and you’ve already earned most of the accolades. The artists I know are extremely competitive, and I’m sure Mr. Chamberlain is no different. When it comes to his place in art history, he’s still keeping score, and he’s ready to go into overtime.