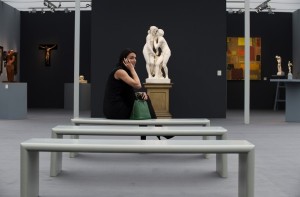 Last week, London hosted three major art fairs and several smaller and younger ones, enough to make any sane person wonder: have we reached the point of art fair overkill? I’ve often thought—and written—that the art fair scene has gone overboard, and now I’m not alone. On his Facebook page New York magazine’s art critic Jerry Saltz recently lamented the explosion of art fairs and the new custom among hungry galleries to send out email blasts from them announcing how many works they’ve sold. “We’ve built a worm into the system,” Mr. Saltz wrote. “The system is self-supporting and draws its power from everyone.” The point is timely, because London’s annual Frieze art fair—the highlight of a week of art parties and hobnobbing in British style—has sprouted a second fair, Frieze Masters, for more “historical” artworks. I was there for the opening of Masters, and it forced me to change my tune. And so, in the words of the great Marcel Duchamp, I will now “force myself to contradict myself in order to avoid conforming to my own taste.”

Since 2003, Frieze has brought dozens of galleries from all over the world to London every October, and showcased some of the best and worst in cutting-edge contemporary art. The show happens under an architect-designed big top in Regent’s Park, and it has been a smashing success since its inception, drawing thousands of buyers and gawkers who feast their eyes and empty their wallets on fresh pieces of art. By riding the Saatchi wave of hipness and hotness in British art, Frieze founders Amanda Sharp and Matthew Slotover succeeded in crowning London as the world’s second great capital of contemporary art. For one crazed week every year, London’s parties and gallery openings rival anything New York can offer.

So, in 2012, has the sinking world economy affected London’s weeklong art bonanza? Apparently not, since several New York galleries continue to open across the pond in a big way. There was plenty of “friezing” at the opening of Pace’s brand-spanking-new space in the Royal Academy building, which featured the unlikely pairing of painter god Mark Rothko with Japanese photographer Hiroshi Sugimoto. Then there was the opening of a swanky new townhouse outpost for David Zwirner, who presented a large Luc Tuymans show well-tailored to European taste. There was even an all-new gallery for Milan’s ever-popular Massimo De Carlo featuring new work by Piotr Uklanski, as well as sundry other extensions, expansions and pop-up shops.

With so much going on, it seems that now almost everyone is saying that art fairs are “out of control.” I’ve thought so for quite a while, yet when I satirized Art Basel Miami Beach less than a year ago, some readers were confused, while others, like Mr. Saltz, attacked me as if I had committed heresy against their church. Funny how quickly the tide turns in art’s little pond. In his Facebook post last Friday, Mr. Saltz proved he’s a switch hitter, rightly pointing out that we have “a hundred art fairs and international biennials … skyrocketing prices during a worldwide economic contraction. The art world’s reflexes are shot; its systems so predetermined that they’re driving us; we’re no longer driving them.”

This may be true, but the dynamic has changed for good and there’s no turning back. I can no longer think of the art fair phenomenon as “out of control,” because the fairs are the ones firmly in control. They control a large percentage of gallery sales, and therefore exert a big influence on the size and shape of art; they are a huge force behind art-buying habits and tastes. Fairs are no longer a good or bad thing, they are the thing, the new reality. Fewer and fewer people go to gallery shows, because sadly, people just don’t have the time or the interest. Or perhaps it’s just easier and more fun to show up in London, Miami, Rio or Dubai to see your friends and party like a rock star, while picking up a painting by a hot artist. These days, art fairs are the only weapons smaller galleries can wield against the large and ever-more-powerful auction houses, which continue their incursion even outside the sales rooms, with the expansion of their own privately brokered art sales. Fairs give the art-buying experience an auction-house sense of urgency, and those impulse sales keep many smaller galleries afloat.

Understanding the delicate balance between art and the art market is where the founders of Frieze have proven their mettle. Remember last May when they launched Frieze New York on Randall’s Island and drew dozens of galleries from around the world? Back then, I thought New York needed another art fair like I needed a root canal, but I was wrong. It was a big success—the place rocked, and it was packed. I was at first skeptical about the new London fair, Masters, which ran simultaneously with Frieze in another tent, across Regent’s Park: why would a company cannibalize its own business by running two fairs in the same town at the same time? The stated charter included only a subtle difference between the venues: “old” Frieze (now called Frieze London) shows only newish work, whereas new Frieze (Frieze Masters) is limited to “oldish” art. The criterion for “old” seemed pretty random: the work merely had to predate the year 2000, meaning in order to qualify for inclusion, it only had to be 12 years “old”!

You may recall that London already has a modestly successful fair for older and more expensive art that runs concurrently with Frieze, the two-year-old PAD (Pavilion of Art and Design), located conveniently in Berkeley Square. No matter, the Frieze duo forged ahead and hooked up Masters with a whopping 175 of the world’s top galleries, easily dwarfing the two-year-old PAD and creating a fantastic new art fair experience, arguably the best I’ve ever seen. Pace Gallery had a $17 million early black mobile by Alexander Calder that was drop-dead, and Helly Nahmad rivaled it with his own colorful 1960s Calder mobiles fancifully twirling to a ’60s bossa nova soundtrack, one of them priced at $20 million. I got to ogle a sumptuous 16th-century portrait of Jesus by Luis de Morales at Madrid’s Galería Caylus, priced at 250,000 euros, and then swoon over Donald Ellis Gallery’s Navajo chief’s blanket, arguably the finest in the world (the ultra-rare first phase), justifiably priced at $2.5 million; now that’s fun. Frieze Masters was an unqualified success, another feather in the cap of the British franchise, and a considerable feat.

But what does Masters mean in the grand scheme of things—and what does all of this say about the market today? Remember the story of the Greek god Kronos, king of the Titans. He came to power by castrating his father, Uranus, and then, fearing his own children (the Olympians) were destined to do the same to him, he ate them (Zeus was spared and eventually overthrew him, fulfilling the prophecy). Like Kronos, Frieze Masters has castrated its father—this year’s Frieze, newly dubbed Frieze London to distinguish itself from its younger New York sibling, logically lacked the energy and testosterone of prior Frieze fairs. It was crowded with art and people but lacking in quality, although, to be fair, there were hidden treasures. Why would the Frieze founders jeopardize their successful franchise by creating a fancier and more mature version of the same thing? Going forward, collectors will demand a higher-quality experience—more bang for their art fair buck—and the new Masters fair delivers the goods. This is not a bad thing; now the Frieze London fair can keep to its original course and stay true to its commitment to be younger and, hopefully, edgier.

In a sinking world economy, dollars will, in all fields, seek out the best values. The feeding frenzy and knee-jerk hunt for the hot, the new and the trendy will not come screeching to a halt, but it is definitely slowing down. Art collectors are bound to get smart and demand quality. Frieze has anticipated this shift and built an all-new venue, one that is both elegant and sophisticated. The decision to emasculate your own art fair by creating a new one must have been a tough one, but in the clash of the titan art fairs it was a smart bet, and it paid off. Frieze Masters could also work well in New York, where fairs of historical art are generally to be found in the fustier confines of the Park Avenue Armory. I hope to “see you real soon”!