I’ve been studying art and design collectors for more than six years through compiling and editing interviews into two books (titled Collecting Contemporary and Collecting Design) as well as writing a regular column in The New York Observer. My own interests in art and design date back to my college days in the ’80s, when meeting and hanging out with artists like Andy Warhol and Jean-Michel Basquiat had enormous allure for me. Going to a Michael Jackson concert with Jean-Michel or meeting Halston and Victor Hugo with Andy became seminal experiences of my youth—these were fun times, and in retrospect, I feel like I was able to touch a part of what became cultural history. I relished the scene but never the product; so in my early 20s it unfortunately never occurred to me to buy a painting or commission a portrait from them, the very notion of becoming a “collector” seeming unappealing to me and far too “bourgeois.” It was only once I married, had kids, and found myself living in an uptown apartment with bare walls that I needed paintings, and so I naturally gravitated toward what I knew.

My early acquisitions were fairly modest Warhol pictures from the estate and a few small Basquiat drawings from auction, and like most businessminded people I was always focused on prices, still under the common misconception that one can think one’s way through the art world. I made sure to never get too wild or ambitious with my collection, still believing that art was risky and uncertain, and that one shouldn’t get carried away. One day in Paris that all changed. 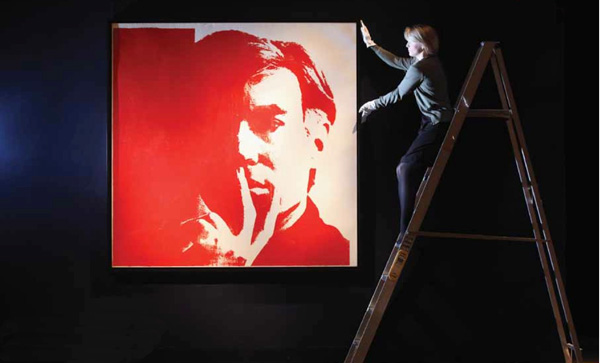 I had been trying to buy works of a young Japanese artist called Takashi Murakami, who was still relatively unknown but whose work had captured my imagination. But when a nice-sized picture (a red Time Bokan) was finally offered to me by his New York dealer, I messed up and refused it because it wasn’t exactly what I was looking for. What a fool I was: Several years later the same picture was 20 times the price! But I was still in the disciplined mindset back then.

Nonetheless I followed my art advisor (soon to be fiancée) to a makeshift warehouse studio in Paris where Murakami’s assistants were putting the finishing touches on works that would go into his breakthrough show at the Fondation Cartier pour l’Art Contemporain back in 2002. The sight of all these little Japanese women painting the large mushroom sculptures and finishing touches on the flower ball paintings pushed me over the edge. I forgot all about my prior collecting guidelines and bought everything I could, six works in total. Months later when I saw the show installed in Paris the truth was self-evident: The works by Murakami were masterpieces— I felt it in my bones, I knew I had hit the art jackpot. And indeed not long thereafter the artist was recognized as one of the leading artists of his generation, and the value of his work multiplied accordingly.

Once I had tasted that type of discovery I was hooked. And suddenly, an epiphany: Why buy the classics of yesterday when I could hunt for the classics of tomorrow? And I was now confident that I had the “eye” to find them.

Years later things have evolved; I know that in order to balance my collection I also needed to reach back and include some anchors from my past, with names like Chamberlain and Calder, while staying loyal to my early loves, like Basquiat or Warhol. But the taste for what’s being made right now is still the driving force and energy behind my obsession. The process continues to evolve with new discoveries, like the work of Steven Shearer or Seth Price. And I continue to follow other artists whose work I love, like Franz West or Urs Fischer, while keeping an eye out for the occasional rediscovery of artists like Julian Schnabel or Frank Stella. I’ve changed a lot over the years, I’ve studied, and the collection has changed with me, it’s expanded in its range, but at the same time it’s become more focused.

Given all of this time spent compiling art information, I’m often asked for advice on how others should go about doing the same, but I have little advice to give. It’s not that I haven’t studied all the rules of collecting, like the one that prescribes that one only buy works that fit over a fireplace, or the rule that says to never overpay, or the one that suggests that “trend is your friend.”

But I don’t follow them. In fact I’ve broken them all, and continue to do so regularly. I only buy what I believe to be the fully realized expression of the artist’s intention, regardless of size. I never buy with the idea that it will fit in a particular place—in fact I’ve been more prone to buy oversized or museum-sized works, and I accept the fact that they may spend some time in storage. I also like to buck the trend, do what others are against or haven’t started doing yet. Most importantly, I’m perfectly happy to not spread my risk, meaning you’ll see me collect the work of a single artist over and over again for years, and I’m willing to pay tomorrow’s price if I have to. You’ll never hear me say, “I remember when it was only….”

Collecting both art and design tells you a lot about yourself, and becomes a way to express your own tastes and views vis-à-vis others. That’s why there are so many ways to do it—the extroverted way, the introverted way, the risk-averse safe way, or the vacuum cleaner “spray and pray” way. People are in it for so many reasons, and art is so vast a field, to say you collect is almost as broad a statement as saying you like music, which can mean liking everything from Gregorian chants to Beethoven, from Edith Piaf to Amy Winehouse. Like music, art transports you out of yourself; but unlike music, you’re going to have to pay for it and live with it.

The financial side of the art market has always been paramount, and only becomes more so over time. Art as an “asset class” (which it really isn’t) has been repriced in the last decade—everything is more expensive than it was and still going higher. Why? Because more people are interested than ever before, and demand is greater than the supply, though some artists like Damien Hirst or Richard Prince have emulated Warhol and try to make sure they create enough to satisfy every budget and soak up every new art dollar. There are those who are loath to mention art and money in the same sentence, but these people are idealists, they are projecting some naïve and pure notion of art onto a market that works like every other, mistakenly insisting on placing art above commerce. As Damien Hirst himself once said, “Art is about life, the art market is about money.” And when the value of your painting goes up it makes you look smart, which is one of the main reasons many people today collect in the first place: They want to be clever and au courant, and there’s nothing the matter with that.

So my advice is to first define what you’re in it for. Then you’ll find that your collection, more than almost anything, will reveal much about who you are and who you want to be. I enjoy the study and research that’s required to appreciate an artist’s work, understand his market, and then figure out where I might fit in. Granted, my approach doesn’t rest solely on my taste, it also takes into account the context of art history and the art market overall. I’m not buying things to decorate or create a private realm of beauty—I want the works in my collection to have a life outside of me, to be lent to museums, to be appreciated by others over time, and to spur some debate and even controversy. I’m in it to make my life more interesting and exciting, not to sit on a pile of art trophies and say, “Look what I’ve got” or “See how smart I am.”

However, I’m not a moralist and I’m certainly not above indulging in some of that narcissism when it’s available. The hard advice I can give you is to never say, “I buy what I like.” You only like what you know, and if you know nothing, you collect out of ignorance. There is so much to know and learn in art, and one’s tastes inevitably change with knowledge over time. Seek out others with your interests, watch them, study them, identify what you’re trying to get out of it and then take chances and make mistakes. Try to satisfy yourself and find out what art does for you right now 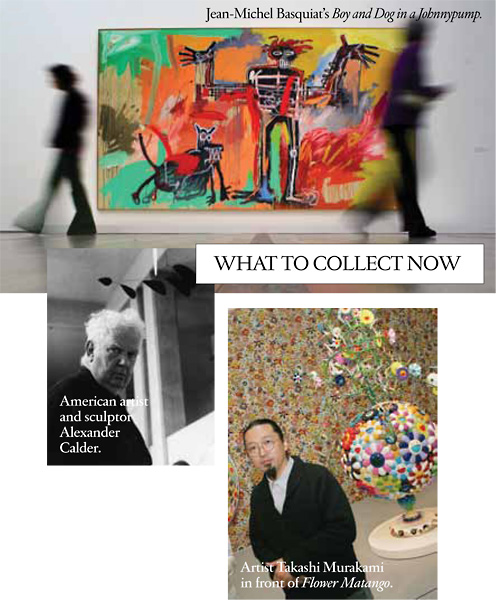