The Catalog essay for Peter Coffin’s show, A, E, I, O, U at Venus Over Manhattan 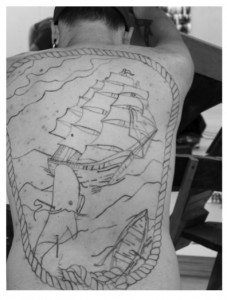 This past summer a fifteen-foot Franz West sculpture appeared on the bluffs in Montauk. Franz had recently passed away—he’d been ill for a long while, but his passing was sudden, and so my installation of this work, titled “Eidolon” (ancient Greek for phantom or ghost) would now serve as a small homage to him. Within a day or so rumors circulated that the neighbors weren’t thrilled with the prominent placement of the piece, on a point overlooking the ocean—in fact they were conspiring to report the culprit to the local building inspector, while leaking the “scandal” to the New York Post and the Easthampton Star. At dinner one of them had even referred to the sculpture with derision, calling it “a whale’s penis”– it needed a better spin, so I told the papers that it had indeed been redubbed “Moby’s Dick” and that Franz would have probably liked that.

The silver lining of this unfortunate incident is that I finally read Melville’s leviathan, a tale of whaling adventures and mishaps on the high seas. Within the first few pages we find a famished and freezing cold Ishmael eager to check himself into a local inn where he “came to a dim sort of light not far from the docks, and heard a forlorn creaking in the air; and looking up, saw a swinging sign over the door with a white painting upon it, faintly representing a tall straight jet of misty spray, and these words underneath—”The Spouter Inn: —Peter Coffin.”  Could it be the one who was opening at this gallery in September, or some ghostly alter ego with the very same name?

Somehow it all made sense. When you meet the present Peter Coffin, a tall, lanky man with sandy hair, you think of the sea; one can easily imagine him overlooking the open oceans, holding on to the standing rigging of a 19th century whaling ship in a North Atlantic storm. Think of his monumental “Untitled (Pirate)” of 2005, a large statue of a bold and salty buccaneer with two peg legs, two hooks for hands, parrots on both shoulders and of course, a patch on each eye. What about his flying saucer, the fantastic “Untitled (UFO)” of 2008, a space-ship featuring a dazzling display of flashing lights that flew over the beaches of Rio de Janeiro. Peter confirmed my suspicions after I asked him about Melville’s salty innkeeper, shyly admitting, “My ancestors were whalers who arrived in Nantucket during the early 17th century.” Suddenly that “far, far away” feeling you have as you talk to today’s Peter Coffin came into focus—it’s as if he and his work are not really addressing you, but rather the vast and dark ocean behind you.

Despite its hand crafted feel, Coffin’s work has a strange precision that is informed by an interest in science and math, in much the way a ship’s captain was once adept at using a sextant and the skills of celestial navigation and a ship’s carpenter was able to mend his vessel with the materials at hand, in fair weather or a raging storm. Wrapped in with the artist’s heritage is a distaste for luxury and its appointments, borne not from any political ideology, but out of distaste for the superfluous or unnecessary.

We can now enter a Peter Coffin show in the same way Melville’s narrator Ishmael once entered the Spouter Inn, with the trepidation warranted by a place of possible danger but also of fortuity:

”It was a queer sort of place-a gable-ended old house, one side palsied as it were, and leaning over sadly…On one side hung a very large oil-painting so thoroughly besmoked, and every way defaced that in the unequal crosslights by which you viewed it, it was only by diligent study and a series of systematic visits to it, and careful inquiry of the neighbors, that you could anyway arrive at an understanding of its purpose… A boggy, soggy, squitchy picture, truly, enough to drive a nervous man distracted …” Inside the Spouter Inn things aren’t as they seem…

Confusion, discovery and surprise bring us right to our Peter Coffin, leading us along the fine line between like and dislike; dancing on the fragile boundary between sense and non-sense. Coffin’s work denies the viewer any opportunity to draw facile conclusions and doesn’t allow easy access—it leaves you wondering what the work is about and just doesn’t care to tell you. The exhibition features a Geochron, the retro wall clock that displays day and night on a world map. This one, however, features the familiar “bell curve” of light and darkness on the surface of the Earth, except that Coffin omits the national borders or any other designation prescribed by humanity, and so the sun rises and sets on one world. Could it be this is a post apocalyptic planet without its inhabitants? Then a Great Dane that might look elegant and almost regal sitting on the floor of a luxurious Park Avenue apartment is enlarged to three times life size, becoming something otherworldly, imposing or simply absurd. The indulgent luxury of owning an oversized pet is turned on its head when it is enlarged to the point where it can devour its owner in two bites. Might it be waiting for a hand signal from its master to “sit or stay”? Across the room is a twelve-foot tall hand quizzically forming the “okay” sign, one that is composed of salvaged lumber and haphazardly held together by rusty nails, looking as if it assembled itself in the aftermath of a shipwreck. It stands so precariously that a puff of wind would precipitate its collapse. Might our collective sense of security be equally precarious, such that all is not so “okay”?

When the white whale finally rams and sinks the doomed ship, Ishmael will save himself by floating on Queequeg’s coffin; the end of an improbable chain of events that leads back to the Coffin Inn. The art of Peter Coffin is also open to improbable pairings and happenstances without the use of homonyms. His practical optimism allows him to playfully make the unreal real, by emphasizing the sense in nonsense.

Looking over the bluffs of Montauk onto the North Atlantic, the bridge from Franz West to Peter Coffin appeared. Both artists share a fearless willingness to risk using the quirky and improbable in order to make great art, by going right to the edge of the comical and the absurd. They loosen our firm grip on the real, by revealing that our solid ground isn’t.

For further information on the show visit: www.venusovermanhattan.com