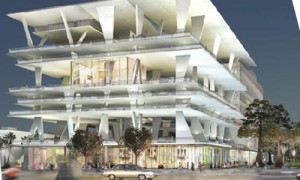 Want to know what the scene was like at Art Basel Miami Beach this year? The answer can be summed up in one word: bloated.

The fair has been running for seven years, and its success has paralleled the contemporary art boom. The fair allows foreign dealers from all over the world to show art in the U.S., still the global art-buying sweet spot, and gives collectors a shopping mall of options, avoiding, in theory, the need to attend countless museum shows and gallery openings; you can see it all in one place. The global economic crisis decimated last year’s Miami Basel. About 40 dealers dropped out, and little was sold. All art market eyes were focused on how this year’s Miami would do.

The good news: It wasn’t a wipeout at all. Pieces under $500,000 were selling remarkably well—how and why, I’m still not sure. Art Basel replaced the 40 dealers who dropped out with 60 more, in a last-minute open-door policy. (One reason could be that Art Basel now owns the management company behind the convention center. The rest of the place was vacant, so why not fill it up?) The organizers should have moved the long-suffering Design Miami fair into the space. Launched in local developer Craig Robbins’ Design District, Design Miami created great buzz. Perhaps not surprisingly, Miami Basel didn’t want it competing with the art dealers, so they kept it “off campus.” Instead, they stuffed the convention center with art, and the result was a gigantic fair in a soft market. The fair was so big and bloated that it forced visitors to navigate the labyrinth with a Borgesian map, one that was totally inscrutable. People were wandering around, lost in the endless onslaught of visual chaos without a way to find the bathroom or, better yet, the exit.

It was bigger than you can imagine, with absolutely no rhyme or reason. In addition to the main floor, Miami also boasted more than 15 satellite fairs for younger galleries and emerging artists, fairs tailored to those who “just can’t get enough.” I couldn’t even see the main fair properly, so I dropped the others. But for the diehards, more is more.

By ballooning in size, Art Basel decided to ignore the direction of the market. The auction houses have intelligently trimmed their catalogs and edited their sales. With low estimates and no more than one example of any artist at a time, sales at auction have been good. At the fair, it’s exactly the opposite. What Art Basel needed to do was edit, and then edit again; we don’t need to see a zillion galleries showing the same artists every year.

The art-fair circuit has become a grind. There’s Art Basel in Switzerland in June, then Frieze in London in October, Abu Dhabi in November and Miami in December. By the time the private planes start to land in Florida, it’s the end of a grueling marathon where dealers are burnt out and inventory is mostly stale.

Did I see anything great? I can’t entirely remember, but I don’t think so. The visual chaos of thousands of un-curated and random works left me so visually bloated that I’d have a hard time distinguishing between a smallish Richard Prince De Kooning painting at Gagosian and a “hard to get” Dana Schutz painting that now is readily available from Zach Feuer, so why bother?

Parties raged on, with the opening of the W hotel a central event; many of the usual celebs and hangers-on were there once again. But if you exclude the art tourists, real collectors were again the minority. The majority of these gawkers/scene stalkers wouldn’t know Damien Hirst from Arman; what are they doing here? I haven’t a clue. They walk around looking at things, understanding nothing and asking for prices, only to remark, “Can you believe it’s 20K?”

Best Gallery: The prize goes to the very classical gallery Gmurzynska for sprinkling a few Sylvester Stallone paintings among Picassos, Miros and their usual offerings. I saw Sly limping around the fair in a black suit, sporting tons of plastic surgery, with Jason Binn in tow. Warhol would have loved it. The paintings were actually good (or so bad it made them good). The same gallery had been stormed the day before by no less than 10 federal marshals, accompanied by dealer/investor Asher Edelman. In a shocking scene, they seized more than $7 million in art one morning because Edelman was awarded a $750,000 judgment against the gallery for damage done to a Ryman painting last year. Sadly, they settled the next day, and all the art was returned to the booth, but it was fun while it lasted. Add that to Stallone paintings, and I give Galerie Gmurzynska the prize for best gallery in the fair and definitely the most fun.

Worst Gallery: Helly Nahmad, for hanging several beautiful Calders but using a big blowup photo of an older, drunken Calder as the background of his booth. Sorry, cheap marketing in the art world gives me nausea; you’re not selling watches or cars, after all.

Private Collections: The private collections have long been the most interesting things to view in Miami. The Bramans were away, so, sadly, this great collection was missed. The Rubells got Audi sponsorship and did their best show in years. They sprinkled in a few pieces by Jeff Koons, Richard Prince, Maurizio Cattelan, Charles Ray, Cady Noland and Cindy Sherman, as well as a roster of trendy market or curator-pleasers like Kelley Walker, Wade Guyton, Walker/Guyton, Nate Lowman, Aaron Curry, Thomas Houseago, Steven Shearer and Adam McEwen. When I see trendy art exhibited and available by the same artists at the fair, I can’t help but wonder about the meaning of buying, showing and then promoting. It feels like successful front-running, but it worked for Saatchi a few years ago, and it’s working for the Rubells; they delivered their best show in years. Their competition, however, chose not to show up.

The De La Cruz collection was exhibited in a brand-new and beautiful new building. They didn’t do a show—they didn’t have a sponsor—but Latin art and feminist perspectives prevailed and that made it different and special. The Eugenio Lopez–Jumex collection (Jumex is Mexico’s largest juice company) was referred to by insiders as the “juice show.” It was a new type of contemporary effort for the Bass Museum; the show is worth seeing, but in fact it’s not super-juicy. Either the curators or the budget went soft at the end; there were too many works and not enough good ones.

By far the best thing in Miami is the new Herzog & de Meuron concrete garage, a five-story exposed concrete parking tower. It’s massive, it’s butch and it’s big-budget cool. It was built by ex-Starwood developer Robert Wennet in classic Miami style, and he chose architects Herzog & de Meuron, who are also doing the all-new Miami Moca. He used the buzz to rent out the retail spaces on the first floor.

Now that’s different, and that we like. Can it be that a parking garage is the best new thing I saw in Miami? As long as the skirts are too short, the pants are too tight and the Champagne is free, I just can’t get enough.