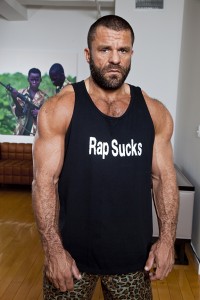 Often, you just can’t put a book down, because you can’t escape the cheap thrill of wanting to know what happens next. As you plunge into Alarma! BOYFRIENDS, the Norwegian artist/author/polemicist Bjarne Melgaard’s fantasy novella of gore, sex, death and dismemberment, you will likely purse your lips in disgust, but, at the same time, catch yourself laughing inside: laughing at the insanity and the perverse pleasure of it all. When finished with the book, you’ll finally be able to put it down, at which point you’ll glance around to make sure no one’s looking, then shove the dirty little volume under a pile of legitimate literature. Or perhaps you’ll dump it where it belongs, in the trash. It’s worse than porn; it’s the kind of thing no one should catch you thoroughly enjoying.

The departure point of the novella’s story is Alarma!, a Mexican tabloid-style magazine that shows exclusively gore—car crashes, beheadings, random shootings—but specializes in the Mexican drug gangs whose preferred methods of execution involve cutting off the heads of their enemies, or burying them alive in the desert sand. (The latter method, as Alarma! illustrates, results in eyeballs drying out and their being gobbled up by snakes or bugs.) Alarma! claims to have a circulation of 15 million, which sounds rather optimistic, but I suppose their numbers are as manufactured as some of the photos they publish, many of which look like they are straight out of a B-horror film: plastic limbs splattered with ketchup. Other times, though, it’s disconcertingly clear that Alarma!, like the great crime photographer Weegee, is showing the real thing.

Alarma! BOYFRIENDS shocks, entertains and disgusts, all at once. Its pages reproduce the artist’s handwriting on stationery from the St. Regis Hotel in Punta Mita, Mexico, and tell the tale of a gay couple, Bjarne and Omar, who stay at a fancy American-style hotel and go into the local town to buy a kilo of cocaine, which they plan to charge on their credit cards. Their shared fantasy is to appear on the cover of Alarma!, and so they seek out a Mexican drug dealer who will dismember them, decapitate them, disembowel them, and make sure they are gory enough to warrant inclusion in the death magazine. “[T]he whole idea,” we’re told in the book’s opening pages, “was to act so stupid that they would be killed and cut up in pieces as dumb tourist looking for drugs.” (The book’s spelling and grammar are intentionally egregious throughout, and have been faithfully reproduced here.)

If that brief introduction has not caught your fancy, then read no further because what comes next is more than you’ll find in any snuff film. “They hoped (the dealers) … would cut off there cocks and stuff it in they stupid tourist mouths …” What kind of person dreams of self-inflicted violence, or of a morbid suicide? About halfway into the book I started to laugh at the whole thing. Can you imagine anyone writing: “we wanna Buy a kilo of cokeaine and could we pay with our platinum credit cards … The Mexican drug dealer says: No, Cash Only.” Of course a couple of gringos can’t buy drugs with credit cards, but the story goes a step further when they then ask the drug dealer to murder them, and he agrees. The couple carefully prepares a list of how they want to die: “1- Cut off our dicks and put them in each others mouths, 2- Cut out the eyes and leave them on the bed, 3- Put a broken coke bottle up Omar’s ass, … 8- Put the cut off arm of Omar up Bjarne’s ass … 14- Put the bodies displayed on the king size bed and take photos while taking the credit cards and money. Phone Alarma!, laugh. Feel overwhelmed, write a poem.”

Does this sound like the kind of book that would appeal to you? If so, grab a copy at the Karma bookstore, where Mr. Melgaard currently has an exhibition of his book-related art, because there’s a lot more to it. If not, don’t read another Melgaard book—and you probably shouldn’t bother with his art, either.

Artists have long used shock tactics to create dialogue, start a polemic or encourage social or political change. I usually don’t care for such political art, because it’s usually too literal. It often ends up feeling overly deliberate, self-conscious and produced. Is Mr. Melgaard using this book to teach us a lesson about violence just across the border? Or educate us about homophobia in Latin America? I don’t think he’s doing either. He has gone further than pedagogy, assaulting us on every level, with sex, violence, drugs and murder.

But after I’d had my good long laugh, I wondered whether mere provocation is enough. After all, shock for shock’s sake is a total waste. Mel Gibson’s film The Passion of the Christ was one of America’s most shocking and horrific blockbusters. It was filled with hatred and anti-Semitism, and it ended with gruesome torture (the complete nail-by-nail crucifixion scene) and, unfortunately, it was a box office hit, one that didn’t teach us anything (other than, unintentionally, something very disturbing) about our own society. I see no redeeming quality in the film or in the loathsome Mr. Gibson, who succeeded only in marketing hate. If in turn Mr. Melgaard, who coincidentally bears some resemblance to Mr. Gibson, doesn’t provide us with any answers, then is he, too, merely producing senseless shock for shock’s sake, selling us a snuff story marketed as art? At least Mr. Gibson made himself millions selling hatred, whereas Alarma! BOYFRIENDS is unlikely to be a money maker. In fact, it’ll top the worst-seller list for sure!

I asked Mr. Melgaard whether his inability to provide his readers with any answers or solutions to the dilemma of senseless violence and hate meant that his book was irresponsible, merely a sensationalist novella, and a failed one at that. He convincingly answered that in his mind it is not art’s role to provide answers. “That’s not what it’s about,” he told me. “It’s a comedy.” He’s right: good art may provoke emotional or intellectual reactions, but if it’s didactic or moralistic, it falls flat and fails.

Art is in questions—it is never to be found in predetermined conclusions—and this novella will leave you with a lot of questions, some of them about art itself, and the systems through which it is bought, sold and exhibited. Near the end of the book, Bjarne and Omar decide to have their double-murder videotaped, so that they can turn it into an artwork. But the older one wonders: “Where will we show it if we are dead, [then] the young one says: … so many places in New York show dead art anyway so why not do it all the way.” You won’t find many answers in Alarma! BOYFRIENDS, but there is a lot of truth in this dark tragicomedy. Read it—at your own risk.