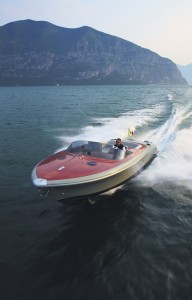 Truth be told, I’ve been a Marc Newson fan for years. He holds a special place in the world of design: He’s famous, good-looking, represented by the biggest art gallery in the world (Gagosian) and an international jet-setting celebrity.

This all may seem rather clichéd, until one considers that industrial design has never had a superstar. There are art stars, starchitects, rock stars and movie stars, but there’s never been a star in the world of design. When you think of Buckminster Fuller, Jean Prouve or Charles Eames, you don’t think of fast cars, speedboats, dream jets and jet packs; here’s where Mr. Newson created a role and a persona that never existed before. Born in Australia, he made his name, after studying in Sydney, London and Tokyo, as the designer of a surprising variety of things: “the skybed” for Quantas Air; Alessi cookware; and restaurants a decade apart, London’s Coast and New York’s Lever House, that were so hot they were almost nightclubs. His furniture, hand-fabricated in limited editions, has been setting auction records for years. Even through this financial debacle, his iconic 1986 Lockheed Lounge (a gleaming curved steel seat that looks like it was made for a particularly stylish astronaut) made more than $2 million at a Philips auction last May.

Marc is far from the only great designer in the world, of course; I have learned to love the work of several other contemporaries, including Jasper Morrison, Ron Arad and more, and am even writing a book on the subject. But the work of Marc Newson exists in a somewhat separate space than traditional design. This is not because of his reputation as a globe-trotting, nightclubbing hedonist (although, as we’ve seen, that helps), but because he has one foot planted in industrial design, one foot in art and a third in the world of luxury. Though he can rethink a rubber doorstop or a plastic chair, he also designs for Dom Perignon, Jaeger Le Coultre, Ford and the European Space Agency.

A visit to his “Transportation” show that opened at Gagosian on Sept. 15 (it features a car, a speedboat, a jet pack and a bicycle) was the perfect opportunity to talk to him about what makes him different. (Full disclosure: He had to talk to me–I’m the majority investor in his Ikepod luxury watch company.)

I wanted to see for myself if his new “Riva speedboat by Marc Newson” (edition of 20) could live up to both the hype preceding the show and the classic beauty of the original 1962 Riva Aquarama mahogany runabout that it’s meant to echo.

Marc Newson: I love the idea of putting things like boats and airplanes into an art gallery. … What I find really interesting is taking these objects out of their context. I really like to re-contextualize a thing, taking a boat and putting it in a gallery, or taking a plane and putting it in a gallery. … All of these things typically end up in really horrible trade fairs–the Fort Lauderdale Boat Show, the Detroit Automobile Show, really horrible forums–and I think it’s impossible to judge them in that context; my products just don’t work in that sort of environment.

Your new Riva looks so much like the original boat; is this not just a “Marc Newson” licensing scheme?

It’s a redesign and it’s a reinterpretation. I like to work with brands that have a real history. Dom Perignon is a good example because I’m not hired to reinvent the wheel. These brands have such strong DNA, they are such iconic brands, so you’ve got to be really careful with them. A designer’s job is not always to design things from the ground up; in fact, rarely is this the case. More often we work within parameters; that’s actually the way I really like to work because that’s what design is. It’s like joining the dots.

What were the challenges with this particular project?

With Riva, it was very much a case of reinterpretation, very little of the original boat remains. … True , the architecture, the mechanics, are only upgraded slightly, but that wasn’t really my point. When you say ‘Riva,’ people think of a mahogany silhouette, and you can even visualize the shape of the boat. So it’s really important for me not to disturb that. … It couldn’t end up looking angular like a Wally yacht.

Do you see luxury being redefined after the recent global economic debacle?

What is the unspoken philosophy behind your design ?

I grew up in the ’60s; you and I can remember when they landed on the moon. … I feel that I grew up in an age when there was this real sense of optimism, when the future was actually futuristic and utopian, as opposed to scary and uncertain. At that time, if you ever said to someone that we’d never go back to the moon, forget about traveling to Mars, they would never have believed you. The future did not prove to be futuristic in that sense. I grew up in Australia, in a very optimistic environment, and as a young boy, these were my fantasies. So in a sense, I am just reliving all of these childish fantasies.

Does that mean your work is taking us backwards?

Absolutely, not. I’m trying to convey a sense of fun, pleasure, a sense of enjoyment, a sense of accomplishment. I speak a lot about this to Jonathan Ive, the designer of Apple. We’re both driven by a sense of optimism, but also driven by a sense of anger at the current state of design in our world today. You know as well as I do that there aren’t that many great-looking boats out there; let’s face it, 90 percent of them are quite ugly. The automotive world is even worse. … Consumers have got no idea, they just get what they are given, and they think they’re buying something really nice because that’s all there is. They’ve got no frame of reference other than all the ugly stuff out there. And it’s up to people like me, it’s up to designers, to give people a choice, a fair choice. In a way, I guess that’s what I’m trying to do, providing appealing alternatives for people.