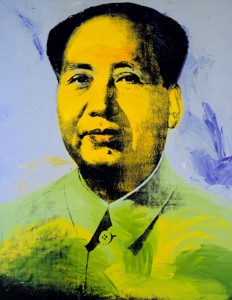 Charles Saatchi is the most influential collector of the past 25 years, and one of the most controversial. Notorious for never appearing at his own openings and for not granting interviews, the British former advertising magnate remains a mysterious figure who wields his influence through his Saatchi Gallery shows and the subsequent sale of the artworks in them; to this day he continues to influence the market for contemporary art in his Gatsbyesque style. I’ve met him only once, at a London restaurant with our mutual friend Jean Pigozzi; Mr. Saatchi picked up the tab, which was generous of him since he was on a diet and ate almost nothing.

A new edition of The History of the Saatchi Gallery (Booth-Clibborn, 1,008 pages, $85.00) has just been released. It’s a reprint of the same title done in a monster-size “OPUS” edition in 2009. Now that it’s available in a manageable size, it’s time to buy it and study it. I scored my signed copy at Sotheby’s in London during last month’s auction previews. This tome is essential for serious art collectors because it shows us the amazing breadth of what Mr. Saatchi has bought, exhibited and sold between 1985 and 2009, following a collecting model I’ve dubbed the “show and sell.” There are many questions surrounding the underlying meaning of his collecting activity, and the morality of his method; just about everything about Mr. Saatchi interests me, in fact, because there’s a lot of Saatchi-ness in today’s art market.

What motivated Mr. Saatchi to produce the oversize book two years ago and to republish it today in a smaller but still jumbo size is no doubt both his ongoing need for recognition and his desire to donate his gallery with its sundry art leftovers to the British government, presumably so that he won’t have to continue underwriting it himself. He tried to get out from under it last July (see my article from Nov. 3, 2010) but that deal fell apart over the gallery’s plan to fund itself through future purchases and sales, a practice that violates museum bylaws in Britain and everywhere else. But buying and selling is what Mr. Saatchi has done for years, and it has worked amazingly well for him it seems, at least until fairly recently.

Flipping through the book, I couldn’t help but marvel at the amazing Warhols he owned, the Judds and the Mardens, the Freuds and the Serras, though sadly for him he owned no Lichtensteins, Bacons or Basquiats. I couldn’t stop myself from adding up what these artworks would be worth today, forgetting Mr. Saatchi’s recent shows and sticking only to the really good stuff he had up until the end of the mid-’90s: I easily came up with $1.5 billion. Even this past decade he proved he still had the eye when he bought, exhibited and then sold great painters like Marlene Dumas, John Currin and Peter Doig and even a few emerging artists, like the then-up-and-coming Mark Grotjahn, who have since garnered blue-chip status. He also had great sculptors like Charlie Ray and Thomas Schutte, but over time his hit ratio has been going down, the proof of this being the book’s inclusion of some horrid and unforgivable chazerai—junk food—that you couldn’t pay me to hang in my house.

Making things more difficult for Mr. Saatchi today is the fact that the art market has become more efficient, and he’s often priced out of it. Rising art prices have forced him to eschew the four-man shows of famous artists he used to do in favor of broader and broader shows with catchy adman titles like “Painting Today” or “Sculpture Tomorrow,” probably because his buy-show-sell strategy has become riskier and less lucrative; art today is fully valued and looks like it will remain so.

When those drift-net shows dead-ended, he went ethnic, with Indian art, then Chinese art, and I’ve already forgotten what else. It’s all worth studying because he has successfully invented a new way to collect art, though sadly now the overall quality of the work keeps forcibly trending down.

Part of me feels Mr. Saatchi never should have moved beyond the original show of 1985, “Judd, Marden, Twombly, Warhol.” It was so good it could have stayed up permanently. As crazy as this sounds, and though it wouldn’t cause any “sensation,” the quality was outstanding, and it would be worth a helluva lot more money than whatever is left in his collection today. In fact, the number of never-ever-to-be-seen-again-on-the-market works that he has shown and sold over the years is downright depressing.

So what conclusions, if any, am I to draw from all this? I asked a wise veteran, art dealer Arne Glimcher, founder of the Pace Gallery, who has dealt with Mr. Saatchi over the years; his answer: “Charles was always a dealer.”

Many would concur, but I don’t; if you’ve owned all that, even if most of it is long gone, then you are what they call a collector-dealer. And, yes, Mr. Saatchi is the original collector who deals. The very reason why Mr. Saatchi, who should instead be lauded for what he’s done for art, is more often maligned by the “art world” is that he regularly sells anything he can. The art world to this day loves to adhere to its hypocritical views that dealers are permitted to sell for profit but “collectors” should not do the same.

I’ve had to deal with this disingenuous hypocrisy for over a decade, but as archaic and absurd as this may sound, most of the art world still buys into the charade. Though I can’t compare myself to Mr. Saatchi, I too have sold art to buy more art, and I refuse to bow to any false moral judgments that others may cast upon me; nor will I behave like a rich, vacuum-cleaner-style collector. I’ll let others play that role.

It’s a well-known fact that in 2007 I sold a fabulous sculpture by Jeff Koons at auction and it achieved the highest price ever paid for an artwork by a living artist. It was a great work by a great artist and it made a great price, so why should I feel badly about a sale that was good for the market, good for the gallery (prices jumped for new works) and a good market confirmation of the artist’s enormous stature? Instead, I received several dirty looks and was accused of being a profiteer: all sour grapes, I’m afraid.

This brings us to the tired old story of how Charles Saatchi ruined Italian painter Sandro Chia’s market when he dumped a suite of Mr. Chia’s paintings at auction years ago—what rubbish that all is. Mr. Chia is a minor figure today; his paintings just aren’t that interesting. Mr. Saatchi didn’t sell just his Chias; he’s dumped everything for years, including his John Currins and his Peter Doigs, but those works have gone straight up into the millions of dollars. As a matter of fact, a Doig painting made $10 million in London last month and collector demand for work by John Currin has never been stronger.

It’s not the selling of art that hurts the market, it’s the timing of the sale, but no matter, good art finds its level so I don’t believe any collector can singlehandedly “plunge” the market of a good artist. That’s why I take offense at the double standard many dealers apply to collectors: on one side are the great patrons who get lots of respect and on the other are those who are derided as speculators and traders, those eponymous collector-dealers. But I’ve seen many of the so-called golden patrons sell paintings in the market, including respected names like Aggie Gund and Dakis Joannou, so these pseudomoralistic views are absurd. They are quite simply the self-serving attitude of dealers who want their “model clients” to buy and never, ever sell.

I also hate those ridiculous resale agreements some dealers have concocted. Though I graduated from law school a while ago, I don’t think they are legally binding, and, anyway, I prefer the old-fashioned handshake deal.

I’m not saying anything goes. If you buy a great piece fresh from the studio through a gallery you know, and you promise to “have and to hold,” then you should cherish it. If you subsequently sell at auction, thus breaking your vow, well, you’ve lost your relationship with the gallery and the artist, and you deserve to because you didn’t play by the rules.

Mr. Saatchi has never played by the rules; he invented his own, and thus changed collecting forever. He must be happy with the result because he’s done it for decades, and the entire contemporary art world owes him a lot for the awareness he’s created, the artists whose works he’s shown and promoted, and the public excitement and enthusiasm he’s created. I don’t think we’ll ever see another like him, not only because he was visionary but also because the market has changed.

Studying The History of the Saatchi Gallery made me wonder: Is it the experience of collecting that counts or is it the physical possession of powerful art? Is it fulfilling to have once owned masterpieces, or does it count only when “death do us part”?

I need it both ways, meaning that I need the excitement of owning work that can be published and shown, but I’m not willing to part with it all, even at exorbitant prices. When I come home I want to be surrounded by a collection that represents my personal history with art, works that were important to my life experience. Given the chance to be a Saatchi I’d like to think I would have kept much of his great stuff and not have succumbed to the temptation to always cash in and seek out the newest new thing.

There was a time when chasing the art world’s next sensation was a great strategy, and Charles Saatchi was the master pioneer of the “show and sell” technique. Several private contemporary art foundations followed in his footsteps, including Dakis Joannou’s Deste Foundation in Athens, François Pinault’s Palazzo Grassi and Punta della Dogana in Venice, the Rubell Family Collection in Miami and Peter Brant’s Brant Foundation in Greenwich, Conn. Mr. Saatchi invented the model over 25 years ago and has been the leader in finding tomorrow’s art market stars and cashing in on them, but those days are mostly over, because the days of “easy pickings” and low-hanging fruit are gone for good. Today, the mission of seeking out the hottest new thing has become painfully tedious, because really going forward in art often requires reaching backward: too often the old is better than the new. Flipping through Mr. Saatchi’s book, a memorial to masterpieces come and gone, I can’t help but feel that today I’d rather see a major Saatchi Collection retrospective than anything he’s liable to cook up next.