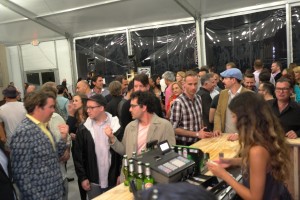 To boldly go where I have never collected before

As in years past, my trepidations about Art Basel Miami Beach began days before my departure. This time it started in the waiting room of my uptown doctor’s office, when one patient called out to another: “Hey Freddie, when d-y’a get ta Miami?” Freddie replied, “Can’t make it till Thursday—we’ll rock.” I knew then that the art world had changed irrevocably—there would be no turning back.

I’d never seen these people anywhere near art before. They wouldn’t dare set foot in a museum (except for the gala), nevermind a gallery. And that makes sense—if they actually entered a gallery, they might have to see the exhibition, think about the artist’s intentions, and listen to someone explain something more than the “market” value of a piece. These folks don’t want that. They go to Miami to splurge and rub elbows with everyone they know and want to know. With their requisite accessory in tow—the art advisor or auction expert—they do some damage at the fair and then move on to drinks, a bite at Mr. Chow and a little nightclubbing. Why should they care about art? Hopefully, they can afford the same type of collection their buddies have—name brand art produced in large enough quantities that everyone can enjoy a similar shiny, new collection, in decorator-friendly colors. Old style “collecting” is so over. Today’s buyers make art purchases for social cachet. As far as “investment” goes, well, they’ll get what they deserve…

It was only a year ago that my satirical “Occupy Art Basel Miami Beach, Now!” article created controversy and prompted a couple of soapbox art writers to attack me and defend Miami—and art fairs in general— in order to promote themselves. Now these same pundits are equally shameless in their rush to recant. Suddenly, it’s all the rage to bash the fairs, according to last week’s story on the cover of the New York Times’ art section, and a cover story in the daily Art Newspaper that teed off with my mock manifesto.

The irony is that I was never on the wagon. I may be a cynic but I’ve been “hitting” the fairs for years, and even picked up a few choice pieces along the way.

Collectors—as that word was once understood—are a thing of the past, so people like me are totally passé, I’m a cro-magnon man. Art fairs are the new reality, and as one soi-disant “collector” said to me in Miami, ”Hey man, you know very well no one goes to galleries anymore, all the action is at the fairs or at auction.” Woe is me, the guy who opened a gallery this very year. I already feel like a dinosaur, and Art Basel Miami Beach won’t let my gallery have a booth for years, no matter how good my shows are, because their committee system protects the legacy galleries from new challengers. This all goes hand in hand with the old “artist representation model,” in which every artist is forced by the system to sign up with a single gallery which then takes commissions on sales the artist makes elsewhere. Thankfully this indentured servitude may finally loosen up now that mega art star Jeff Koons just announced he’ll be leaving his roost at Gagosian Gallery to do a show at David Zwirner’s new Chelsea space. This move at the top could be the game changer I’m waiting for, but, then again, only time will tell: old habits die hard.

In Miami, a major Los Angeles dealer leveled with me. “Like it or not,” he said, “we do most of our business at these fairs.” But the trade show turned into retail bonanza is the same phenomenon that happened with fashion shows in the 90’s as they morphed from displays for department store buyers to spectacles directed at wealthy couture clients with a sprinkling of celebrities to generate press. The same is true of the auction houses, which once catered almost exclusively to the trade. These days, the theatrics of their overblown catalogs and their lavish jet-set parties target big fish from Eastern Europe, Asia and beyond.

Why fight’ em? I want to join’ em, and so, in order to better understand the fairs, I attempted to visit every single one of them in Miami last week, why be a snob? Once again, in order to refresh my outlook, I went against the grain, and visited the many so-called “satellite fairs” first—leaving Art Basel Miami Beach for last. Here is what I found.

SCOPE Art Fair: This event bills itself as “the premier launching pad for contemporary art,” so it seemed like the right place to launch myself into the satellite art fair experience. It’s hard to get a firm grip on what ties Scope together, until you look up at the names of the galleries. They were mainly from cities outside the major art centers of NY, LA and London. Here you can find galleries from Tampa and Fort Lauderdale, or—why not?—Carmel and Cincinnati. These guys have no shot at getting into the “real” fair (Art Basel Miami Beach) and they wouldn’t fit in if they did. I found lots of “looks a lot like” paintings and plenty of sculptures with optical illusions and pop art copy catting, the aptly named “eye candy” for art buyers who know nothing and don’t feel any need to. I did make one discovery, the Red Truck gallery from New Orleans, a wonderful place that featured a tattooed and mustachioed artist who made works on paper inside of old matchbooks. Chris Roberts-Antieau, the lead artist of the gallery (and the owner’s mother) sews pieces of vintage fabric into surreal portraits and scenarios with a vintage style that merges quilting with devil worship spun into a naïve bayou fantasy. To add to the ambience the gallery had lots of funky friends just “hanging out,” like that tattooed artist with a handlebar moustache and dice for earrings and a dwarf dressed in black leather who vaguely resembled Sid Vicious and ran my credit card.

Art Asia: The Asian art at this event, housed in the same tent as Scope, was amazing, the kind of stuff you would expect to see in Luke Skywalker’s favorite Chinese restaurant. From wild Gursky-ish photos of the Forbidden City to Manga-inspired paintings of nude Japanese vampire babes in bikinis, this stuff couldn’t be beat.

Ink Miami: This one sounded exciting, since after years of lusting for big bold paintings and sculptures I’ve got a knack for works on paper, especially ones by Betty Tompkins and Salvador Dali—but this little fair was a sad one. The mostly old vendors were selling tired prints and multiples. It was a place to find an old, unloved Sol LeWitt or perhaps a sad Jim Dine.

Untitled Art Fair: This happening tent right on the beach was the first fair to open and was by far the hippest scene that night. It seemed to cater to the Miami crowd without any pretensions of being “better than”. It felt like Scope without the crafty schmaltz. It was all fun, and had about as much bite as a wine cooler.

PULSE Art Fair: This fair has long been considered better than most satellites. It humbly describes itself as “the leading US art fair dedicated solely to contemporary art,” but its pulse was a bit too intense for my eyes to bear. A group of galleries exhibited stuff that looked like it could hang in the bar of a Star Wars movie or in the captain’s quarters of a Klingon Starship: it’s the perfect fair for those who use their eyes but not their brains. The place is fun, but take my advice: don’t go with a pulsing Miami hangover.

NADA: the annual fair of the “New Art Dealers Alliance” had the best energy in all of Miami. Sadly their acronym just about sums up what 95% of this work will be worth in ten years. Still, some of the art was pretty damn good, and many of the galleries are up and comers in the “real” (NY-London-LA) art world. On a Thursday morning NADA was packed with savvy collectors and several dealers ogling many deserving galleries that can’t get into or can’t afford to be in the “real” fair. I did see a lot of derivative art but the buzz was fantastic, and the energy was palpable, so I’m 100% certain that in all that throng of merchandise for sale there were indeed some gems to be discovered, and I spied a few art advisors and big fish dealers snooping for them.

What I loved most about my visit to Miami’s art fair outer space was watching the concept of “art as investment” go straight out the window. The patrons of these events were having fun, and really buying what they like. Case in point: you’ll find almost no art advisors at any of these places except for NADA. The need for “advisors” happens at Art Basel Miami Beach where the stakes are much higher, and there they are ubiquitous. Sure much of the work at the satellites was derivative and bastardized, or in shockingly horrific taste, but frankly Art Basel Miami Beach wasn’t a bed of roses either. The good people shopping in these “other”fairs have no pretense of “collecting” great works; they are mostly into eye candy and a fun time, and these events ensure that they are well served. A more sophisticated would-be speculator/investor scours NADA to find the next hot artist before he or she makes it into the main fair and sees a hefty increase in price. In Latin it is written: “De gustibus et coloris non est disputandem”—dy’a get my point? For the Miami satellite fair go-ers, art’s still about fun and not just for show or to count paper profits. And that’s the good part—there’s no pretense of any other motivation. Pity so much of it is an affront to the eyes.