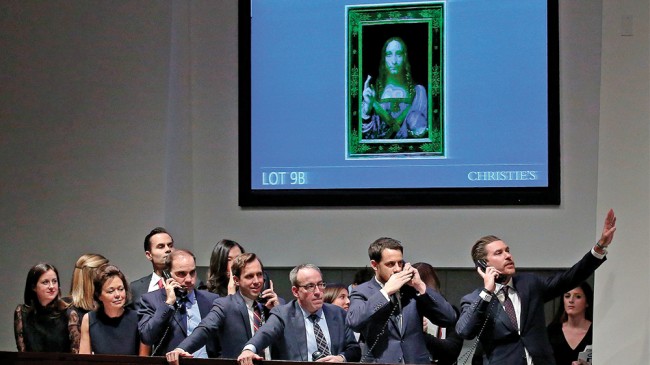 What does it really take to create a $450 million painting from Leonardo “Dough” Vinci?

“Salvator Mundi,” the most expensive painting ever sold at auction, was hammered down at the Christie’s Contemporary evening sale last month. But a number of art critics had blasted the painting. “Why is a Leonardo in a Modern and Contemporary auction?” wrote New York magazine’s Jerry Saltz. “Because 90% of it was painted in the last 50 years.

I can sympathize with offended critics, but they could be missing the most interesting point here, which is not a discussion of what the painting is (or isn’t) but a discussion of how it got to be what it is: the most expensive artwork ever sold.

The Leonardo was owned by Russian oligarch Dmitry Rybolovlev. He had made billions in the fertilizer business, though his company has been accused of sundry ecological disasters, among other serious allegations. He began to place some big bets on art about 10 years ago, and decided to rely on the sole advice of Yves Bouvier, heir to an art moving-and-storage company based in Switzerland.

Among the masterworks that Rybolovlev acquired from Bouvier was “Salvator Mundi.” In an ironic twist, the painting had been offered to this very writer for the paltry sum of $55 million several years ago. But I foolishly scoffed at it at the time, saying I could never make myself comfortable that it was real.

But Bouvier was smarter than I; he bought it for $70 million-$80 million and flipped it to Rybolovlev for $127 million — a handsome profit for the Swiss businessman however you slice it.

Many in the art world at the time felt Bouvier was a real crook. But humorously enough, many art investor/collectors I have seen in this situation just walk away from their losses, mainly because they’re more embarrassed to be made a fool of in the press than to lose money. Not so with this oligarch; he’d gone against Bouvier as hard as he could, and though my law school days would indicate a breach of trust and perhaps of contract, no judge would have viewed Rybolovlev as an unsuspecting widow or orphan.

These days, everyone has access to auction results and second opinions, so in my opinion, he never would have succeeded in playing the babe in the woods; the presumption that he was or should have been a sophisticated investor would have held. When you spend this kind of money, shame on you for not doing your homework.

Enter Christie’s’ Swiss upstart Loïc Gouzer, who once again smelled opportunity where others might fear disaster. He struck a deal to sell the painting at auction, with a guarantee reported to be $100 million, meaning the Russian was prepared to take a $27 million hit to unload the piece.

Gouzer and the team at Christie’s developed an international marketing plan to take the painting’s value to record levels, queuing up round-the-block lines to see the masterpiece, and adding a saccharine video clip of gawkers resting their eyes on it as they are brought to tears.

It was tempting to conclude that “Salvator Mundi” would end up in some multi-billionaire’s boudoir, a fitting resting place for such a treasure. Lo and behold, it was bought by some Saudi prince no one has ever heard of. But then we learned it was won by proxy for Mohammed bin Salman the Crown Prince of Saudi Arabia — and that now it’s perhaps in the Louvre Abu Dhabi. Art morality aside, this is one painting that will suit any museum in the world, including the Middle East, Asia or deep in the jungles of Central Africa. And it will look smashing in the Louvre Abu Dhabi.

Besides, the art market market at auction is all about the money, so morality doesn’t apply. The gallons of ink and media this sale has produced have got to have attracted more press than any work of art has received in history; like it or not, it’s been a huge success. This in itself is a form of Warholian art. It’s also pure show business, and yes, this astounding record will also be broken because, after all, the show must go on.