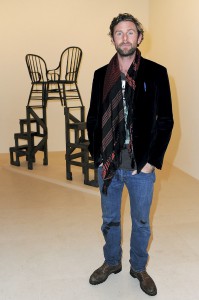 “Is it the art or is it the hype?” I’ve been asked this question so many times it makes me ill. It always comes from those who don’t look at art and are trying to explain why they don’t buy it. In a skeptical tone they slip me this line on a regular basis. “Yes,” I tell them with a smile, “it’s all a fraud. These contemporary art stars are all phonies and fakes, it’s the fancy galleries promoting this stuff and you’re the smart one who figured it all out.” But what I’m thinking is, “Cretin, you don’t understand a damn thing about art.” But now even most art believers have to admit that parts of today’s art scene have indeed gone too far. Yet when I spelled it out for the world in my satire of the Art Basel Miami Beach fair last December, I was attacked by many insecure pundits, advisers and dealers who felt threatened by the words. But forgetting the whiners, it’s what everyone was and is still talking about. Just last Sunday 60 Minutes ran a Morley Safer-hosted exposé bashing the fair, highlighting the hype in order to suggest that contemporary art is no more than a marketing circus. We can’t really blame old Morley Safer—he’s just another blowhard—but I was shocked to see one respected dealer, Tim Blum of Blum and Poe in Los Angeles, play right into Mr. Safer’s canard. “We’re from Hollywood, this is theater, only theater,” he said when asked about art prices. “It’s the wild west … competition is vicious … when the question of value comes up we drop the subject.” Mr. Blum misspoke—and that’s regrettable because, let’s face it, when the hype booms louder than the art, the art world invites the philistines right to its gates.

What bothers art world outsiders is the reality that everything exists within a context, and if they don’t understand the context, they jump to dismiss what they don’t understand. But what’s the matter with some hype? Most of today’s movie stars didn’t make it on their talent alone; they got the right role at the right time, then parlayed the hype. Would Julia Roberts have become a superstar without her breakthrough role in Pretty Woman? What about Robert de Niro in Taxi Driver, James Dean in Rebel Without a Cause or Liz Taylor in National Velvet? So why shouldn’t a visual artist benefit similarly by a breakthrough show, one “produced” by a smart dealer or curator in the right place at the right time? A film can be advertised and promoted; why not an artist and an exhibition? Fine art is often held to an unrealistic standard, a mistaken belief that there is such a thing as “pure” art that exists outside the context in which it’s created and exhibited. Great art is expected to somehow get by without great salesmanship, and great staging.

The artist Dan Colen is the perfect example of someone who has plenty of hype. He’s been created by his dealers at the massive Gagosian gallery, right? Might he just be the product of the “fashion of the moment” effect, the W magazine/Interview magazine scene, a leader of the pack of pretty boys who make big prices at auction? This may seem to be the case to some, but the truth is that he was always a good artist. I’ve followed his work for over eight years, long before he joined Gagosian. Even back when he was showing with the smaller gallery Peres Projects, it was clear to me that he was the standout talent of his peer group. His decision to show with Gagosian, the largest gallery in the world, may, in fact, have been a mistake: though he’s had many shows and sold a lot of work in the short term, his market may experience a severe hangover if there is too much work and the market feels saturated. He’s a real talent, though, and so he’ll probably weather the storm of overmarketing and overproduction. The hype that comes from mass marketing an artist is a double-edged sword: it’s a money-making short-term strategy, but it can kill the artist’s career if the work isn’t truly exceptional.

The other night I had the pleasure of discussing this topic with one of the top painters in the world, an American artist in his early 70s who has moved far beyond any hype that helped him along the way. I asked him why he has been so loyal to the gallery he’s been with for 20 years. He doesn’t need a gallery—he makes only 12 paintings a year and could sell them all easily even if he hung them in an IKEA for the weekend. By way of answering, he told me, frankly, that most artists are fearful of change. “Do you mean to tell me that at your age you still need to be handled and managed as if you were a child?” I asked. He smiled and said, “I just want to go to my studio and paint, I don’t want to be bothered with the rest of it.” Now, some artists are proactive; they have taken the marketing of their art into their own hands. Damien Hirst shows what he wants, where he wants and, whether you like it or not, he makes his own hype, with Bono and Jagger and sundry movie stars in tow. But most artists don’t play hardball. They stick with their dealers in the old-fashioned way, because they are conservative, or lazy or simply satisfied. I’m sure this will evolve as time goes on. Recently we have seen more artists changing galleries than ever before, though most of them end up joining the rosters of the few mega galleries. That is where they feel safe and secure.

Is switching to a mega gallery a sure-fire recipe for market success? Absolutely not. It can be a good career move—the vast majority of successful midcareer artists have stuck with their original galleries, but then again most of them have stagnated, in part because their new work, shown in the same old gallery, gets tiring after a while. But it can also result in overmarketing because the temptation to overproduce, using the generous production budget available, is too strong, so global demand gets oversupplied. The work ends up looking overhyped and oversold­—the hangover effect we see in the careers of so many artists who have bounced around several galleries.

Ultimately, the question of whether an artist’s success is the result of great work or great hype reminds me of the time many years ago when I attended a lecture by the great Argentine writer Jorge Luis Borges. In the Q&A, trying to sound clever, I asked, “You often speak of the Platonic versus the Aristotelian views of the universe—are these two not contradictory?” Borges answered, “No, no, no, you do not understand—they are not contradictory, they are complementary!” The audience was hushed, a communal gasp was heard as if great words of wisdom had been spoken, but the real message was simple: the two views were necessary to complete the whole.

This is true for art and its context—they are complementary, not contradictory. Those who dismiss contemporary art as an overmarketed Ponzi scheme have missed this truth. Warhol and Dali were masters of hype, and that didn’t make their art less meaningful; nor was it the sole reason for their art’s success. Nothing is separable from its context, not even this article, but when the hype overshadows the art, it’s no surprise the skeptics have a field day.