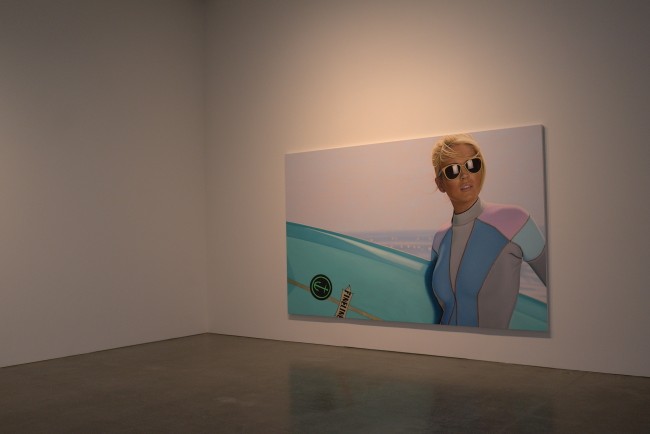 Charm, Beauty and Creativity, The Three Graces of Richard Phillips

“Corneille depicts man as he should be, Racine depicts him as he is.”

In characterizing the famous French tragedians of the 17th century, whose plays focus almost exclusively on passion and politics, the famous essayist and critic La Bruyere thinks of these playwrights as painters, using the verb “peindre” (to paint) rather than “depeindre”(to depict). The great Corneille paints man as he should be—principled, and tragically dragged down by lust and avarice. In Racine’s vision, man is painted as he is: debased and degraded from the get-go, the tragedy deriving from his efforts to hide his true nature.  The thought of playwrights as painters brings to mind the painters of today like Julian Schnabel who create theatre by making films. The paintings of Richard Phillips’ have often focused on passion and politics—the glossy province of celebrity, fame and power, a somewhat tragic terrain, especially in the hyperbolic tabloid variety. Phillips has now gone from painting to theatre and back again in his own way, by scripting and directing three short films, then making paintings from their stills. I wonder if La Bruyere were fast-forwarded into the 21st century, just to see and opine on this new body of work, would he find man painted as he should be, or would these new paintings depict man as he is?

Until a year ago, Philips was known exclusively as a painter, one who limned characters that epitomize our culture (celebrities), our politics (child soldiers in Africa, former president George Bush) and our media-saturated psyches (pornography, violence) through the use of a hyper-aestheticized technique: smooth, impasto-less brushwork with a color saturated palette. Then, in 2011, he was invited to contribute a short film to an art film project at the last Venice Biennale, one coincidentally financed by none other than the famous and photogenic globe trotting Russian socialite/philanthropist Dasha Zhukhova. The short, which featured a sultry Lindsay Lohan in a cerulean infinity pool, led to two other films, one with the ex-porn phenom Sasha Grey, and then a Lohan sequel, in summary the artist completely altered his practice. No longer basing his work on pre-existing media imagery, the new paintings—including those taken from a fictional fashion shoot featuring voluptuous Victoria’s Secret model Adriana Lima—are now based completely on pop imagery of his own creation.

Would Racine find anyone more “real” than Lindsay Lohan? Would she not be a perfect character for his take on humanity, exposing the tragic flaw in man, who tries to be virtuous, but whose indelible nature—love, lust, and revenge—draws him inexorably into the dark? Who more Racinean than the former Disney child film star, whom drink and drugs and Vanity Fair covers keep in the gleaming spotlight? Despite what Joan Collins once said (“the problem with beauty is that it’s like being born rich and then getting poorer every day”), Lohan’s enduring beauty and charisma are indisputably intact: she’s making a comeback as the comparably tragic Liz Taylor in the upcoming cable movie “Liz and Dick.”

Philips’s first Lohan film was very much like one of his paintings: an idealized depiction of a real celebrity, tabloid vixen promoted to Greek goddess. But this time the portraits were moving pictures, and with Lohan sporting only a skimpy bikini, the camera watched her as she swam, and then drifted gracefully down a Malibu beach. Her doe-eyed, come-hither gaze invited viewers to devour her with their eyes. Much of the short film’s appeal is directly attributable to Lohan and her cultivated mythology, but just as much of it is pure Phillips, who succeeded in creating a seamless transformation of one of his paintings into a moving image. In some ways, he had topped his paintings, by elevating celebrity, beauty, exploitation and the power of the media more articulately than any painting ever could.

A year later, he followed up with a Lohan surf sequel, once again teaming up and co-directing with virtuoso surf filmmaker Taylor Steele. This “surf noir “effort draws on a deep passion for surfing and, unlike the films of artists who have chosen to direct in the more traditional feature format, it has no story, no narrative—it’s pure art, a visual feast. It also accesses and reveals Lohan’s powerful acting skills and broad emotional range in a way that none of her commercial; feature-length appearances have, to date. At times she looks close to tears, fearful of the viewer who is threateningly pursuing her, or, perhaps even more frightening, fearful of some mysterious pursuer lurking behind the viewer. But the end of the film softens her, and her manner shows her inviting the viewer to engage in some clandestine sensual encounter by the dark glow of a nighttime beach fire. At the end of the film, the dark ocean is a backdrop both sublime and terrible, setting an ominous mood without capitulating to cliché. This scenario against which the enigmatic psychodrama unfolds feels like a beautiful and tragic infinity.  We have quickly travelled far from the early daytime surfing scenes where the ocean serves only as the liquid that Lohan can slide and dance over. The night scenes evoke fear and danger with a promise of illicit sensuality. The end of the film surprises us by rolling in reverse, as crashing ocean waves recede back into the darkness. Herein is a feeling of love and innocence lost, perhaps recalling Jean Cocteau’s famous depiction of Orpheus’ descent into the underworld in search of his beloved Eurydice.

With the success of these films we are left wondering: is there still any need for paintings? But the paintings Phillips has made from film stills bring us something we don’t know we need until we see them. They add a new dimension to the story, because in the path from celluloid to canvas; history is reversed, and Lohan joins a gallery of beauties stretching from La Gioconda to Warhol’s Marilyn.

The paintings are overtly sensual, depicting not simply idealized goddesses but flesh-and-blood beauties, alert and fully aware of the viewer’s presence; their erotic magnetism we drink in with our eyes. They hark back to any number of classic paintings, including Mark Twain’s (and my) personal favorite, Titian’s Venus of Urbino. Whereas Titian leaves us guessing as to whether his Venus is a comely betrothed or a lusty courtesan, Phillips, in his “surf noir”, captures a crowd of paparazzi hounding Lohan, giving us a new kind of Venus altogether, one without any illusion of modesty. Lohan is never far from the gaze of Us or People magazines; she is the live prey the media feeds on. There is no illusion of exploitation, Philips is not giving us a secret peek into the boudoir: we are all gawkers, but Lohan knows we are watching and she wants us to.

For this show Philips has also staged a different type of theatre, but one this is especially relevant to the moment. It’s a simulated fashion photo shoot of Victoria’s Secret Brazilian bombshell Adriana Lima. The ultimate pinup, she professes to be a devout catholic, and at age 26 was still claiming to be a virgin. She’s now 31 and has 2 kids but was once famously quoted saying, “Sex is for after marriage.” (She’s married to Serbian pro basketball player Marko Jaric.) For Philips’ camera, Lima draped her bikinied uber-body over some of Brazil’s most famous architecture, including Oscar Niemeyer’s cathedral in Brasilia, as well as over the shantytown of Rio’s sordid favelas. Transferring these images to oil on canvas, Phillips ushers Lima, too, into the pantheon of art historic beauties.

As Phillips himself has said, painting is ultimately “the most personal form” of rendering an image. He may begin with a photograph, but the end result is a highly aestheticized, dreamy image—a woman whose timelessness transcends beauty. Lindsay Lohan, Sasha Grey, and Adriana Lima—their power resides precisely in their ubiquity, they are ingrained into the consciousness of anyone who has ever watched television or surfed the Internet. Is Philips’ art the ultimate form of celebrity worship because he has managed to turn exploitation on its head? Can we read Lohan, Grey and Lima as predators and not prey?

In the 1960s, Andy Warhol turned newspaper images of Marilyn, Jackie and Liz into his own mass-produced paintings, transforming the tragic heroines of that time into Pop Art icons. In Philips’ paintings and films, this process is reversed. There is nothing cynical about his reverential gaze and adoring brush strokes; we revel in pure beauty and are awed by the power of celebrity. We are also willing participants in the process they control-, they exist because we continue, breathlessly, to create them.

The paintings are the end point of the viewer’s experience; in light of them, the films become moving portraits, preparatory sketches or, as Phillips calls them, “drawings with unlimited possibilities.” Paintings enjoy a privileged status on our cultural menu, because they aspire to join the sacred history of art, and if successful they have the power to suspend even the onslaught of today’s media generated image. Philips has described his style of painting as “building light, form, and shadow to create a new physically painted reality beyond the rationality of photography or digital print.” Paintings are forever personal and intuitive, unlike a film; they cannot be turned on or off.

Every age has its celebrities and its tragedians, its muses and its controversies. Today it is hard to imagine that historic dramatists like Corneille or Racine were once just writers who dedicated themselves to the theatre out of necessity: they couldn’t attract a royal audience, or obtain an ecclesiastical benefice. They dedicated themselves to the theatre of their time, though it wasn’t “high literature”, simply entertainment for the more general public. Corneille’s subsequent popularity then earned him the enmity of his competitors at the prestigious Academie Francaise, and they even refused him admittance the first two times he applied. Racine was in turn accused of poisoning his lover (and star actress) the Marquise du Parc, by none other than Catherine “La Voisin” a famous fortune teller, who later met with her own tragic end when she was burned alive for witchcraft. The rethinking of history and its contradictions and controversies remind us that the media hype surrounding the lives of beautiful women in the public eye is not a phenomenon without historic precedent.

Philips’ new paintings are not about about the clichéd tragedy of our media saturated age, in fact there is nothing tragic about them. His celebratory depictions of these three powerful “graces” are without judgment or righteous morality; they are not about clichéd notions of exploitation. Defying conventional definitions of “the real,” his work is a homage to his subjects as they are, and as they should be; this is what makes them feel right in the “now”. The notions of man’s struggle with society and its false morality are all gone, because man or woman “should be” seen just “as they are”. A fresh reflection on traditional notions of beauty and morality, these new works inform our understanding of who we are, and casts aside obsolete notions of who we, too, should be.