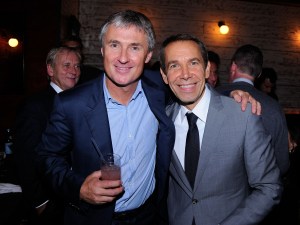 Bogie knew, “you must remember this …” Here are a few art world surprises to remember, and some we’d rather forget.

The Chelsea Flood: Who could ever have imagined that a silly old hurricane would sink the entire Chelsea art district and parts of Red Hook? Sandy not only inundated basement storages; first-floor galleries had their key November exhibitions  floating in six feet of dirty seawater. I walked through the tragic scene the morning after, and saw trashed galleries with dirty art dripping and salty. It’s amazing how fast many of Chelsea’s galleries reopened, some acting as if nothing had happened. What’s next, a tsunami?

A Big Top on Randall’s Island: Who needs another art fair … Rio? Istanbul? Phnom Penh? Anywhere but New York, right? How could a city that is filled with galleries and that already hosts the Armory Show (which just sold to the eccentric art magazine publisher Louise Blouin) and the ADAA Art Show possibly handle another fair? Turned out it could—and then some. In May, London’s successful Frieze franchise opened a game-changing new fair housed in a big top tent on Randall’s Island with over 170 international galleries, and thousands of shoppers flocked in. It seems like most buyers today can’t be bothered to take in a gallery show; they want their art product sliced, diced and hung side-by-side in tidy cubicles, so they got what they were looking for. It was a huge success, and confirmed that the fairs—art’s shopping malls—are where it’s at. They’re like the World Series and the Super Bowl of art combined. All that’s missing is stadium vendors selling peanuts and Cracker Jack, and one that yells: “Bee-ah Heeyah!”

Schimmel-Gate in Los Angeles: Nearly three years ago, one of New York’s most beloved impresarios, the inimitable Jeffrey Deitch, gave up his gallery when tapped by his friends on the board of the Los Angeles Museum of Contemporary Art (MoCA) to run their troubled museum. Mr. Deitch was known for discovering new talent and putting on art spectacles that attracted a large and youthful downtown following. When he arrived in L.A., rumors spread that veteran MoCA curator Paul Schimmel was not pleased. Under Mr. Deitch’s direction, a worthy Jack Goldstein retrospective was canceled in favor of a timely Dennis Hopper retrospective. This was only the beginning of bitter infighting between curator and director, infighting that this past summer led to Mr. Schimmel’s departure and prompted all the artists to resign from the museum board, including hometown heroes John Baldessari and Ed Ruscha. The L.A. press was all over it, as were several in the New York art community who had once lauded Mr. Deitch; in lockstep, they all turned on him. Will he remain in L.A. after the museum’s Urs Fischer retrospective this spring? In hindsight, mistakes were made all around; let’s hope the museum and everyone involved looks at the bigger picture.

Christie’s Record-Breaking Contemporary Art Sale: In November, Christie’s Contemporary Art Auction tallied a sale of historic proportions, totaling a whopping $412.2 million. This type of result creates a myopic view that, despite the bad economy, art is selling like hotcakes. Though big numbers were achieved for blue-chip names like Franz Kline and Mark Rothko, the theater of it all helps keep all the smaller boats afloat—and disguises the reality that, outside the tippy-toppy-type “trophy” auction results, the rest of the art market has slowed down.

Red Hot Richter: German artist Gerhard Richter’s greatest contributions to painting are his photography-based figurative works, especially those relating to Germany’s Nazi past. But his color abstraction paintings, of which he has made many over the years, have recently hypnotized the art market. A large one sold for $21 million a year ago, and soon after that, this past October, came an inexplicable price of $34 million for a particularly luscious picture. Only a month later, a painting of a similar size hammered for only $17.5 million. Go figure. Sure, each one is different, but the prices for pictures of equal size and comparable quality are bouncing between $15 million and $35 million like a dented Ping-Pong ball. It just goes to show how irrational today’s art market can be. As my grandfather always used to say, it’s “Easy come, easy go!”

Koons Flies the Coop: All over Miami earlier this month, rumors were flying that mega-star Jeff Koons was leaving his roost at Gagosian Gallery to have his next show hosted at the new Chelsea digs of the David Zwirner Gallery. Many felt this just couldn’t happen, and then it did. At the highest level, star artists have more power than they seem to realize—perhaps now they’ll start to use it. Fast on the heels of the Koons news came the announcement that Damien Hirst would split from Gagosian. But Mr. Hirst, who had been showing with Gagosian for 17 years, was never really “represented” by any gallery, since he’s always done as he’s seen fit, even when that meant putting his own work up for auction and thereby trashing his market and the collectors who supported it. Then the mysteriously mad Yayoi Kusama, as if she were psychically tuned in to Messrs. Koons and Hirst, announced that she too will leave the Gagosian Gallery. Through “loyalty,” lethargy, apathy or fear, the biggest-name artists have been willingly shackled to their heritage galleries—now that may be changing. I don’t believe this trend is specific to Gagosian. The very foundations of the “artist representation” model are crumbling. Maybe all the top-selling artists will fire their galleries and form one big collective, then they can just set prices and cut out the dealers. I’d prefer it if they charged one price at the door and then a bingo machine randomly chose which artwork you got; that would make it fun again.

Tate Talent to the Met: By hiring Tate Modern’s dynamic curator Sheena Wagstaff, Tom Campbell, the Metropolitan Museum of Art’s youthful director, is reinvigorating the Met’s stodgy contemporary program; he’s got the space, too, having rented out the Marcel Breuer building, which the Whitney Museum will soon move out of.

Dishonorable Mention: Venus Over Manhattan, my uptown gallery, opened in May with a theme show titled “À Rebours,” inspired by the story of the Duc Jean des Esseintes, the debauched 19th-century art collector. One day, a thief walked into the gallery and plucked a fine Dalí off the wall, right under the nose of a gallery guard and smack in the crosshairs of a well-focused security camera. After the heist generated over 500 news stories around the world, the culprit shockingly mailed the piece back to the gallery in a poster tube. Was it a take from the oldThomas Crown Affair or some dangerous and delinquent art performance? No doubt it was a wacky prank—don’t get me wrong, we love when people enjoy the show, but kleptomaniacs are no longer welcome.