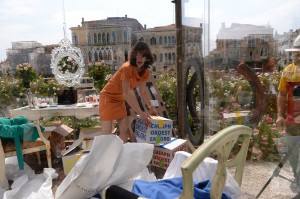 The opening of the 55th Venice Biennale two weeks ago was the third leg of a month-and-a-half-long art marathon that started with the young and fun Frieze New York in early May, followed by Art Basel Hong Kong, which I’ve called “the fortune cookie art fair,” and continuing on through the four-day Art Basel, Switzerland’s well-established mega-art fair (the one that motivates most dealers to finally pull out their good stuff) and the London auctions at the end of June. Venice’s fabled and, this year, ill-timed Biennale welcomed jaded and jet-lagged dealers, collectors and curators with a week of cold and rain and spiffy water taxis that had tripled their regular rates. With a perky “ciao” and “prego,” taxi pilots ferried well-heeled passengers to swanky restaurants like Harry’s Bar for €90 plates of pasta.

The art world loves to complain about everything, even a week in the world’s most beautiful city. But really, one needn’t drop 60 euros on a taxi to cross a hundred-foot canal, since there’s always a vaporetto (water bus) nearby. No matter how you travel in Venice, you are always surrounded by an aura of luxurious decadence. The Biennale is a contemporary art festival staged in a city that is itself a work of art.

There were definitely a few things worth seeing this time around, like the offsite Ai Weiwei show in a cathedral. The space was filled with six eerie dioramas of his recent solitary confinement courtesy the Chinese government. It’s hard to believe that repressive regimes like this still exist in the 21st century; the work is a powerful reminder that abuse, torture and worse happen every day.

The wackiest spectacle of the week was the one that really brought “Miami Basel”-style hilarity to this quintessentially Italian carnival of art. “Future/Perfect,” an art performance created by fashion designer/artist Tara Subkoff, sponsored by the fashion brand Marella and starring the sultry Milla Jovovich cocooned inside a glass bubble beautifully situated on the Grand Canal, took the cake, or the tiramisu, if you prefer. I was lucky to get there early for the press preview, so I got to ogle Ms. Jovovich, who, dressed in only a negligee, went on an online shopping binge via her cellphone. She received so many deliveries that the cardboard boxes eventually overflowed the small space.

I read the performance as a rather literal metaphor for consumerism, or art buying; the bulimia nervosa of today. Though the content of the work might have been a bit thin, the splendid rose-filled Venetian garden was anything but, and a setting of such beauty with Milla Jovovich as the main attraction was simply intoxicating. I couldn’t help but wonder how Tara could have pulled off this spectacular stunt until I learned that she had very recently taken up with an art star, who had apparently made a call to his powerful patron, the owner of two of the biggest private museums in town. The latter generously offered the use of his private rose garden, and Tara was in business. The love-struck artist himself could be seen in the back of the garden, co-directing the whole luscious scene, a big smile on his face; this only heightened everyone’s sensual and aromatically floral experience. I applaud them all, because these days, what happens in Venice stays in Venice …

Having quickly given up on the desperate need to see each and every one of the hundreds of art exhibitions and projects in town, I instead made a conscious decision to expose my delicate retinas to as little bad art as possible, the wise less-is-more strategy. Nonetheless, I had to see the main curated portion of the Biennale, in the Arsenale and the Central Pavilion in the Giardini, or public gardens, and this year’s master of ceremonies was none other than our own New Museum’s Massimiliano Gioni. Everything about the show was smart, including its title, “The Encyclopedic Palace,” taken from some obscure Italian artist’s absurd notion of building a tower to house all the world’s knowledge. The first room of the show is dedicated to a large scale-model of this inane tower, and you can see how the appealingly Borgesian concept resulted in an Italian futurist version of the same old tower of Babel we’ve seen hundreds if not thousands of times. Massimiliano’s mentor, the Italian prankster artist Maurizio Cattelan, said to me, “ease knott eazy to eenstahl such work beauteefullee with such a small boodget, eh!”

Massimiliano has taken a big and creative risk in letting several “outsider” artists “in” to his show. Though they were unknown to most viewers, much of their work looked really good, including Sinichi Sawada’s wild Japanese ceramics and Eugene Von Bruenchenhein’s Max Ernst-y paintings, and each outsider artist had a special story: these were discovered in a moldy basement, or this was never discovered until the building was torn down, or this was never shown because the artist lived upside down in a cave full of bats. I liked it all because the concept was challenging, new and different, especially the Enrico Baj paintings. A week later, I found myself wondering if I’d rather settle on a good Karel Appel picture.

Looking at “outsider” art with fresh eyes led me to accept Londoner James Brett’s invitation to the Venice edition of his popular Museum of Everything. Mr. Brett is an entrepreneur who’s been mining the “outsider” concept for a few years now, and it’s been catchy enough to earn him shows with prominent private museums in Moscow and Turin. For Venice, the Museum of Everything showed an artist whose work looked vaguely like a watered-down version of the German painter A.R. Penck. It was installed in croquet-hoop-shaped striped mini-tents, giving the whole thing the appearance of a circus attraction.

This stuff was not for me, yet it did share the “outsider” theme and highlighted the Achilles’ heel of the concept. New York’s American Folk Art Museum recently lost its building, perhaps because this type of work just isn’t all that interesting in the end. That it’s “outside” the system doesn’t make the work good; it’s just another marketing hook, like dubbing it “primitive” or “naïve.” I hate to sound old-fashioned, but a museum of everything ends up being a museum of nothing.

Back at the Biennale, lots of people were frustrated by Mr. Gioni’s exhibition—they felt like they had come a long way and didn’t get the art fix they were entitled to—whereas to the regulars, those who have “seen it all” and “done that,” Massimiliano’s choices were sophisticated and refreshing. He made a strong curatorial statement that challenges both the art dialogue and the art market of today. Reflecting on the experience, I realize now that not many of the individual works stuck with me, and perhaps that was the point. When there are so many artists most of us have never heard of, it’s no longer a show about individual works. The notion of “outsider” art becomes really interesting to me when some of them succeed in penetrating into the “inside.” If they don’t, it’s mostly forgettable. Art with a capital A is all about the context, and understanding a cultural system. But inserting “outsiders” helped frame the ultimate questions: what is the purpose of the Biennale today and who is its audience?

These queries didn’t need answers for anyone who saw Venice’s blockbuster, “Manet: Return to Venice” at the splendid Palazzo Ducale. This amazing and extensive exhibition featured one room that silenced all questions. Here was the artwork that Mark Twain once dubbed the “greatest painting in the world,” Titian’s Venus of Urbino. To my absolute delight and amazement, the painting Manet based on it, his über-famous Olympia, was hanging beside it. The pairing of these works, separated by 300 years of art history, trumped the rest of what Venice had to offer. In his day, Manet was controversial and subversive, an innovator whose work challenged, and eventually defeated, the system. Experiencing these two jaw-dropping masterpieces in this setting was the end-all for me; there was nothing more I needed to see.