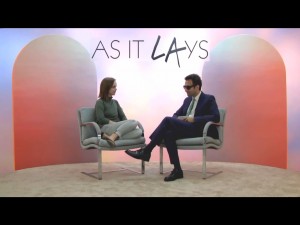 Alex Israel is a youngish L.A. artist whose pastel-color panel paintings look like the sets of ’80s porn flicks; they’ve been selling like hotcakes at chic galleries in Paris and Berlin. I tried to see his recent one-man show at the übercool and cutting-edge Lower East Side gallery Reena Spaulings Fine Art, but the gallery is so übercool and cutting edge that, on the Friday afternoon I chose for my visit, it wasn’t even open. In fact, the two times I have ventured to this gallery in an attempt to see an exhibition, during regular gallery hours, they have managed to have the doors locked and the lights turned off. I’d given up on writing about Mr. Israel’s work, when I realized that I could simply review his new TV show, As It LAys, the one he’s recently uploaded to You Tube and for which he created a website: www.asitlays.com. This interview show, with Mr. Israel as host, reminds me of Andy Warhol’s famous “Screen Tests”: both projects are, in superficially different but actually very similar ways, forms of video portraiture.

The so-called “Screen Tests” that Warhol made in the early ’60s weren’t really screen tests at all. Warhol shoved his camera in his subject’s face and did a two-and-a-half-minute film. Whether it was a factory regular like Edie Sedgwick or Lou Reed, or some celebrity like Bob Dylan or Salvador Dalí, didn’t really matter, because in the end all the subjects were just meat to grind in Warhol’s lens, reminders that youth, beauty, sex, fame and fortune exist only in the moment.

Before As It LAys, Mr. Israel’s claim to fame was that he was once an assistant to the late L.A. artist Jason Rhoades and served as the doorman for Rhoades’s infamous “Black Pussy Soirée Cabaret Macramé” parties. Now Mr. Israel has succeeded in taking the Warhol screen test to a whole new level by doing interviews with celebrities and quasi-celebrities in which he reads a series of bizarre and awkward questions—to Rachel Zoe, “If you were to create the perfect salad, what would be the key ingredients?”—from a set of index cards he shuffles in his hands. His subjects are left trying to tell a personal story without help or support from their interlocutor. Mr. Israel’s portraits, which seem to both emerge from and comment on the current Facebook/Twitter sound bite zeitgeist, are painful in the way Warhol’s once were: they exist in an existential space devoid of human emotion or sympathy.

Unlike Warhol’s project, for the most part, Mr. Israel’s guests are older, passé. They are walking, talking pieces of L.A.’s cultural history. Taken together, they represent a sampling of L.A. personalities who were once at the center of the scene but now have one foot—or, in some cases, both feet—out the door.

A TV-style interview where the questions are read right off note cards in a harsh and empty environment is a strange thing to watch. But only a few of Mr. Israel’s victims realize they are being set up; most of them just writhe and sweat in their seats. I feel their pain. In the end I was left wondering: what is it like to have once been famous and important in L.A.? What comes after that?

His questions run the gamut from banal to bizarre. Adrienne Maloof, a reality-TV “housewife of Beverly Hills,” is asked, “Did you ever cheat on a test?” She answers without hesitation, “No, I helped others, the whole football team.” Yet she never seems to reflect on what she just revealed to us, namely her relations with the “whole football team.” Restaurateur Mr. Chow is asked, “In the battle between people and robots who wins?” His answer should have been “Get lost,” but instead he responds, “Nature is more precise than a machine, every leaf is unique, just like every thumbprint … a robot is a machine and therefore has limitations.” And it’s funny! It gets worse when 71-year-old singer-songwriter Paul Anka is asked, “Chocolate or vanilla?” and gives a three-minute monologue. Or when Jon Peters, the once-famous film producer and head of Sony pictures (and ex-Barbra Streisand hairdresser) gets caught in a trap when he’s asked, “Are you a good storyteller?” and answers, with candor, “When I was a kid I was more of a liar, but when I grew up I made those lies into a fantasy.”

Their moment in the spotlight may be over, but all of these guests are still dead set on proving their relevance, so much so that they are willing to talk at length to this unknown artist/interviewer. Most of them end up, tragically, revealing their hollow “screen test” side. L.A. is a city obsessed with youth and power; it must not be very pleasant to feel marginalized in a place where you were once the center of attention.

That said, it’s not all tragedy. At 95, Phyllis Diller gets credit, in my book, just for showing up. When asked, “Are you reading anything?” she supplies the riposte, “I cannot read. I am losing my eyesight.” Other interviewees didn’t have such an easy out, and that makes for moments that are strangely poignant. Asked, “What do you want the world to know about you?” the seven-time NBA All-Star James Worthy replies, uncomfortably, “Basketball is what I did for a living but it’s not who I am as a person.”

There are some deliciously awkward moments. Cheryl Tiegs, the ravishing beauty who in 1975 graced the cover of Sports Illustrated, doesn’t fare very well; she reveals that her favorite karaoke song is “At Last” by Etta James. Quincy Jones is asked, “What is your favorite color?” Doesn’t he remember the scene from Monty Python and the Holy Grail when Sir Galahad is asked the very same question and answers: ”blue … uh, no … green” and gets tossed down a ravine for his “mistake”? Clearly he doesn’t, because he sheepishly answers, “Purple, um … and lime, black and uh … orange,” then gives the camera a pained smile. Perhaps the most cringe-worthy of the interviews is the one with JFK’s nephew Bobby Shriver, who is painfully politically correct. “Who would you most like to meet?” he is asked, and he implausibly replies, “I once opened the door to a room and there was Luciano Pavarotti … it was too much for me.” How absurd for this to come from the man who created the global RED charity with his friend the rock star Bono. Oh, Mr. Shriver. Are we now to believe you were never into rock and roll, that all along you had us fooled, and were actually an opera buff?

Three of Mr. Israel’s guests managed to turn the tables on their host—no mean feat. Producer Rick Rubin answers every questions with a single word: “Yes … sometimes … somewhat … no …” Even when asked the final “What do you want the world to know about you?” he refuses to humor Mr. Israel. “I can’t think of anything,” he deadpans. Novelist Bret Easton Ellis takes Mr. Israel to task. When asked, “What do you want the world to know about Bret Easton Ellis?” he replies, “Nothing. I don’t want them to know anything.” Androgynous rock star Marilyn Manson steals the show with a performance. The question ”Have you ever considered going vegan?” is answered, “I considered having sex with a vegan but then I wondered if she would say, ‘Oooh, what’s in your semen?’” When asked, “If you could change one thing about your physical appearance what would it be?” he answers, “Not having such a big dick … it’s troublesome sometimes.” Yes, Mr. Manson, this must be a serious problem for you indeed!

I interviewed Mr. Israel in L.A. last week and tested my theories on him. Weren’t the questions written to make a mockery of the interviewees? He denied that, claiming that he hadn’t even written them. “My intern wrote mild-mannered questions,” he said. “I didn’t want it to be a talk show with hot-button questions.” Hadn’t he deliberately selected individuals whose moment of relevance had passed, whose stars had faded? He took offense at that interpretation. “That’s such a cynical view,” he said. ”I selected people who made a major contribution to the L.A. landscape at a point in time … that’s our city’s cultural history and I chose to celebrate it.”

As part of the Facebook generation, Mr. Israel is perfectly comfortable giving a campy and nostalgic embrace to L.A.’s history, while feigning ignorance of the tragic implications of living in the past. Perhaps he is earnest; his project, complete with his intern’s “mild-mannered” questions, really isn’t, after all, a cynical satire of the talk-show format. Still, am I a throwback to another era because I was looking for deeper meaning, even where there is none?

Perhaps I’m equally unrealistic because in growing older I still hope to grow better, or wiser, or at least more comfortable with what, where and who I am. In As It LAys, success, fame and cultural relevance are not the recipe for happiness or even personal satisfaction. The project reveals several variations on the theme of self-deception; perhaps with age this is something we all fall prey to. In the words of the great 17th-century French thinker François de la Rochefoucauld, “One is never so easily fooled as when one thinks one is fooling others.”