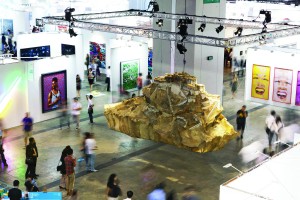 The fair now draws a good portion of the world’s major galleries as well as many of its better small ones. It’s something of a gold rush: dealers come seeking the few heavyweight Chinese clients who have been spending millions of yuan recently at New York auctions. Majority control of the fair was recently purchased by Art Basel, which runs the most prestigious art fairs in the world, further confirming the art world’s hunger for growth in an emerging market and its continuing need for new sources of collector dollars.

Although some dealers will always claim to have sold every artwork in their booths during the fair’s opening hours, a few key questions asked after midnight in Hong Kong’s raging nightclub district revealed to me that as the event’s second day drew to a close, many hadn’t yet sold a thing–but admittedly that information was obtained after several doses of vodka and Red Bull.

Galleries brought higher-quality pieces than I’d expected; their booths were filled with choice contemporary artworks of manageable size, presumably selected to fit into smaller-scale urban Chinese apartments. But if these works weren’t by marquee-name artists like Damien Hirst, they were likely to be passed over by the local clientele.

Ironically, this made Art HK a great place for Westerners like me to shop. New York dealer Marianne Boesky hung an entire suite of hard-to-find Barnaby Furnas paintings; elsewhere in the fair, one could snap up desirable pieces by Rudolf Stingel or Piotr Uklanski, and ask for a discount–which is precisely what I did. At Art Basel, or its sister fair in Miami, those same works would have sold within minutes.

In Hong Kong, the pace is different: a disciplined crowd arrives after work, around 6 p.m.; locals told me to expect the biggest crowds over the weekend. But even then, the Chinese don’t seem interested in a long learning curve. Many appeared to get impatient when artworks required too much explanation; frankly, I don’t see them “learning” the ins and outs of the broad range of Western art for at least a decade or more.

Why, then, are Western dealers so eager to pack up their inventory and ship it, at great cost, to China? The answer is that the need for fresh clients is pressing because the ones they have at home have bought so much that their appetite has slackened. Even if things aren’t moving quickly now, dealers are optimists; they won’t easily give up their belief in Hong Kong’s field of dreams.

And some business was done. Hong Kong is full of transient private bankers from the West who relish a chance to see what they’re missing at home. And some Chinese who hail from Taiwan–or the mainland, as well as the occasional new collector from Indonesia or Singapore–are prepared to step up for a medium-size and medium-priced work … as long as it’s by a brand-name artist. Hong Kong is plastered with luxury brands: Hermes, Chanel, Louis Vuitton, Dunhill. Chinese buying of Western art seems to be in keeping with this: they’ll opt for Damien Hirst or Takashi Murakami, and pile into a Richard Prince show at the new Hong Kong branch of the Gagosian Gallery, because Gagosian, with 11 outlets around the world, represents the premier global art brand. Buying art there is like buying an Hermès bag: it comes with a stamp of status and credibility.

That’s the theory, but not the reality. I saw many Chinese collector-types frown at the “Girlfriend” photos–bare-breasted biker chicks–in Richard Prince’s show at Gagosian, and Prince’s medium-size Nurse painting had too much blood-red paint and perversity to appeal to a conservative Chinese sensibility. Nevertheless I heard rumors that other brand-name galleries from the West, like London’s White Cube and New York’s David Zwirner, are looking to open Hong Kong branches.

Chinese society is emerging from 60 years of communist rule, and what’s on its mind are the features of a fairly new capitalist system: real estate, stock market speculation, consumer goods. If art can make them money, they’ll pay attention, but they have no patience for the Western art market’s taboos about buying for resale, or its dealers’ moralistic credo against the “flipping” of artworks at auction. The tacit prohibition against selling primary works at auction is contrary to the very nature of the Chinese; in fact, they want auction action. The Chinese love to gamble and speculate; the more art is linked to money and trading, the more they’re going to like it.

Christie’s auction preview is one of the only ways the Chinese get to see Western art, since they don’t have many museums of their own. They like the game of “show and sell”: it’s an opportunity for a gambling instinct to meet the public spectacle of auction. Christie’s cleverly sponsored museum-style show of new works by Mr. Zeng came complete with a ribbon cutting featuring the second-highest-ranking Chinese official in Hong Kong and Christie’s distinguished French owner and collector, François Pinault. Chinese love their own cooking and this show featured an artist whose early fame came from the skillful mask paintings he made in the 90′s, one of which sold for $9.6 million at auction in 2008. Edward Tang, an expert at Christie’s London who hails from Hong Kong, explained that Mr. Zeng paints every work himself in a style reminiscent of classic Chinese calligraphy, and that his latest series fits precisely the taste of the newly minted regional Chinese oligarch looking for big city savvy and status. Mr. Zeng’s prices reflect the strength of his brand; similar new paintings from his studio apparently sell for over $2 million today whereas, according to Mr. Tang’s father, China Club owner Sir David Tang, they were $500,000 just three years ago.

Are they a good investment at these levels? My Chinese friends spoke with pride of the value of this great painter, and I was reminded that, at auction, it takes only a single new buyer from the mainland of a country with a population of 1.3 billion to double yesterday’s value. The fact that Mr. Zeng recently left his sporadic representation at Acquavella Galleries and is rumored to be going to Gagosian serves only to confirm his blue-chip status.

The Chinese take pride in their newfound economic might. Motivating them to buy our art won’t be the easy layup some dealers hope for and the century-old European tradition of polished dealers advising wealthy client-patrons on how to create the great collection is a nonstarter in Asia. The wealthy Chinese like to socialize with their famous artists and buy directly from them or at an auction where the comfort of an underbidder makes them less suspicious of being taken for a ride. The great new art frontier is real, but pioneering will be risky and expensive. Success in China will be dictated by Chinese tastes and mores, and they’re going to play by their own rules.