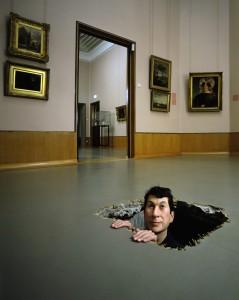 The art market is rolling along with plenty of momentum, while the rest of the world still feels pretty shaky. Although I cannot fully explain this phenomenon, there are number of plausible reasons–some economic and some specific to the art world. Try them out at Christmas and New Year’s parties when the inevitable art doubters appear and, scratching their heads at record prices, ask, “How is it possible that pigs can fly?”

First of all, we are currently in an exceptionally low-interest-rate environment, and I see no reason to believe things will change anytime soon. If you buy government bonds, there’s virtually no yield, and the same is true if you put money in the bank–and worse if you put it in the stock market. That’s been a sickening roller coaster for most people. It’s no wonder the notion of “hard and tangible assets” is quite popular today. Art may not be very hard, but at least it is tangible; there is an international market for it both privately and at auction. And if inflation does rear its ugly head, people believe that art prices will inflate right along with real estate and other hard assets. This applies to Chinese ceramics, vintage automobiles, great pieces of furniture, antiquities and almost any exceptional collectible that can attract the attention and the money of the international über-rich.

The best example of rising value in a lousy economy is gold, today trading at an all-time high. Gold rallied from $550 an ounce a couple of years ago to today’s record $1,350. People buy gold when they are scared, so gold has run high, even though it has no intrinsic value other than that defined by its demand in the jewelry industry. Yet it has been the best thing you can put your money into.

That’s how I like to feel about art: It has no use, but it has real value, at least in the minds of some. After all, didn’t the Nazis go around stealing all the art they could, and now 60 years later people are still fighting over it? They’re still suing over who stole it, who kept it and who really owns it.

The acquisitive nature of the art collector is something that simple economic analysis can’t account for. Sometimes two people fall in love with one work, bidding it to the moon. Some artworks soar above the estimates because they were mispriced. Sometimes dealers and speculators help a work achieve a high price because it serves their vested interests, just as in any other business. Some works have been impossible to get for years, and hit pent-up demand from collectors who’ve been waiting eagerly for a shot.

That said, the broad health of the art market is somewhat fictional. In 2010, the high end ($1 million-plus) showed signs of real strength, and the low end (under $100,000) was also robust at fairs and in the smaller galleries. But what suffered is the middle of the market. This makes some sense, since the big trophy hunters are the least affected by the economy. They still have the money to go after the big game. The young stuff is picked up at fairs or trendy galleries by real aficionados who just love to “collect,” even if most of it is bad work that has no chance of surviving the decade. The middle market is what has softened the most, because people are far less motivated to chase things that are neither trendy nor of trophy quality.

In an environment where not everything will sell, the auction houses have been prudently grooming their catalogs to keep the “buy-in” rates low, and to lower the estimates and the expectations of the consigners, they’re trying to under-promise and over-deliver. The result has been some strong results at auction, and a few records, sales that seem to show that while the market is not back to late-2007 levels, it is not that far off.

The market, though, is actually an aggregation of several mini-markets–for each country, each style, each artist, each period of that artist’s work. In fact, each artist is his or her own market, with supply-and-demand characteristics that greatly influence prices, factors like who owns the work; who’s buying the work; who’s showing the work; and, of course, who’s selling the work and in what quantities.

So I took a look at a few notable trades in contemporary art that defined 2010.

AUCTION SALES ARE always a bit of a crapshoot. It’s one night, one lot, one moment in time; if two willing bidders don’t show up, the painting can simply sell for the bid in the book, or not sell at all.  On the other hand  if two people are in the mood to duel, what’s the harm in a little potlatch? (an Indian ceremony where property is destroyed by its owner in a show of wealth that other guests later attempt to surpass). It won’t be the first time people are willing to overpay for what they want, and why should we presume that every collector needs to be totally rational. anyway?

As the year ends, overall, things are much better than almost anyone predicted. Sotheby’s stock rallied from a 52-week low of $19 all the way up to a high of $47. The year felt to me like one big self-fulfilling prophecy: The dealers and the auction experts kept telling us that great art is scarce, rare and valuable, a good place to store personal wealth for self-satisfaction and as a good investment. On its face, and in light of a shaky economy, these views seemed self-serving and possibly spurious. But they proved to be true, even if some prices defied gravity.