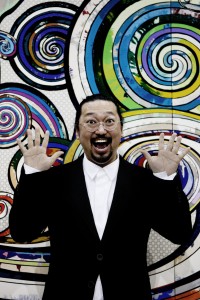 It was a long 15-hour flight to Doha, Qatar, to see Japanese artist Takashi Murakami’s latest mega show. Why would I bother flying all the way around the world to see paintings I’ve mostly seen already? Perhaps because, according to the BBC, Qatar has quietly invested over $1.25 billion in art over the past five years—in fact, I’d bet it’s double that—and also because they are part of what’s keeping this crazy art market buoyant. And what about the facts that Qatar reportedly bought a painting (not mine!) from Cezanne’s “Card Players” series for $250 million, and is rumored to be the buyer of auction cover lots from Rothkos to Lichtensteins, Warhols and beyond? I also wanted to visit my favorite Murakami painting, Tan Tan Bo Puking, a.k.a. Gero Tan, and see how it compared to his newest one, a 300-foot long masterwork dubbed The 500 Arhats.

I’ve been a Murakami devotee for over a decade, starting just before his breakthrough, the Fondation Cartier show back in ’02, and I’ve seen and studied most shows he’s done, from his biannual “Geisai” art fairs to the fascinating “Little Boy” exhibition at the Japan Society in 2005, right through the Brooklyn/LACMA retrospective of 2008 and up to the recent “Homage to Yves Klein” paintings at Paris’s Galerie Perrotin.

But none of this could explain to me why the 29-year-old Sheikha Al-Mayassa bint Hamad bin Khalifa Al-Thani had chosen him to do this mega show in Qatar, appropriately titled “Ego.” The Sheikha, 14th child of Sheikh Hamad bin Khalifa Al-Thani, the Emir of Qatar, is a powerful woman in her country, which isn’t an easy thing to be in a traditional Muslim society. She serves as the chair of the Qatari National Foundation of Museums and the Council of Trustees of Qatar Museums Authority, a board that includes one New Yorker, MoMA board president Marie-Josée Kravis. As chairwoman of the QMA she has a powerful role in a country where a new and beautiful I.M Pei-designed Museum of Islamic Art has just been completed and the all-new National Museum of Qatar by Jean Nouvel is slated to open in 2014. But still I was wondering, why would Qatar and its powerful Sheikha choose Mr. Murakami as the artist to launch their ambitious contemporary program?

In my view, Mr. Murakami is the most international artist in the world, because he’s the only über-star who doesn’t hail from the U.S. or Europe. He’s entered into the small coterie of artists, like Jeff Koons and Damien Hirst, who, more than just art makers, are global brands, and he’s the only one of them who has designed Louis Vuitton hand bags that generated hundreds of millions of dollars in global sales. But he remains an eccentric Japanese man, who favors funny, childish outfits and preserves to this day the myth that he sleeps in a sleeping bag on his studio floor, as opposed to in an Upper East Side town house­—so, he’s the perfect insider/outsider. (He did, however, conceive a child with the lovely Chiho Aoshima, an artist in his Kaikai Kiki company, so it seems he did manage to escape his sleeping bag at least once.)

As strange as the idea of serving sushi in the Qatari desert may sound, that’s what the show felt like to me. Qatar has the money and the will to become the destination for the preservation of some top-tier Islamic and global culture. It is a small country, but one with grand visions; a country with a minuscule citizen population of about 300,000 people where it is estimated that the valuable oil and gas reserves will last another 75 years. Divide that by the population and one can comfortably speculate that each citizen is theoretically worth hundreds of millions of dollars. This is also an extremely young state, a British protectorate as recently as 1971. Given all of this, is it any surprise it has been on a global shopping spree, spending its money on banks, real estate, soccer teams and a little art for fun and for show?

The powerful Al-Thani family is also savvy to politics and publicity. Two days before I arrived in Doha, Sheikh Al-Thani himself presided over a peace negotiation there for the two rival Palestinian factions, Hamas and Fatah, and managed to get the two sides to agree to a power-sharing arrangement going forward, a deal that, whether it sticks or not, will lend credibility and prestige to this small country’s aspiration to play a larger role in the Middle East. After my return to New York, I read in The Times that an American-sponsored initiative anchored in Qatar is seeking to open talks between Afghan president Hamid Karzai and the Taliban. In much the same way it has done in regional politics, Qatar has decided to use art to promote and publicize itself on a global scale, using name-brand architects and showing name-brand artists to establish its international cultural credentials. This is a smart and enlightened way to differentiate itself from other Gulf nations.

Though Abu Dhabi, another Gulf state, has proposed ambitious museum initiatives on its Saadiyat Island, including the Zayed National Museum, the Guggenheim Abu Dhabi, and the Louvre Abu Dhabi, and though it has hired architects like Norman Foster, Frank Gehry, Jean Nouvel, Zaha Hadid and Tadao Ando, it is operating with a concept somewhat different from Qatar’s. The Qatari elite relies on a personal vision, that of the Sheikha (helped by “advisers”), whereas Abu Dhabi’s way relies on institutional credentials (Guggenheim, Louvre) and hired curators vetting and creating the appropriate permanent collection. I’m a supporter of both approaches. After all, among other Gulf nations, many of which have more money than either Qatar or Abu Dhabi, there doesn’t appear to be much interest in putting it to good use; they seem intent on remaining culturally insulated from the rest of the world. This situation will one day prove precarious for them, especially as the Arab Spring continues to unfold.

Political and cultural initiatives make Qatar a proud nation. One Qatari intellectual told me that even if the $1.25 billion his country has spent on art to date is worth only $1 billion, the sum total of its public relations victory far outweighs any speculative gain or loss on the art. “Long term,” he said, “this art is a national asset, it is valuable. We will never lose a penny on it.” The current art market isn’t Qatar and the Sheikha’s concern. They have a greater goal, and it looks like they are well on their way to achieving it.

So where does a 300-foot painting called The 500 Arhats fit into all of this? The tsunami that struck Japan on March 11, 2011, had a magnitude of 9.0 and resulted in almost 16,000 deaths. Qatar, as did many other countries, supported Japan, donating $100 million, but Mr. Murakami’s inspiration for The 500 Arhats relates not only to the tragedy but also to his pride in Japan and its cultural strength. Implicit in that pride has long been his carefully disguised animosity toward the West, including bitter feelings about a castrating defeat in World War II and the devastation caused by two atomic bombs. But that anger had run its course in Mr. Murakami’s work and the tsunami gave him new inspiration for a great painting that represented the four elements—fire, earth, air and water—and Japan’s long tradition of proudly overcoming natural disaster.

Mr. Murakami’s departure point for The 500 Arhats was the little known 19th-century Japanese painter Kano Kazunobu. On Nov. 11, 1855, an earthquake with a magnitude of 6.9 shook Tokyo; more than 4,000 lost their lives and 10,000 homes collapsed. Kazunobu was commissioned by the Genkoin temple to paint 100 scrolls depicting the 500 original disciples, the Buddha’s original disciples, and this monumental task provided him the freedom to depict all aspects of Japanese life, including a typhoon and a tsunami, all in his baroque Japanese style, which by the late Edo period in the mid 1850s was already incorporating Western art influences, serving more as mass entertainment than high art. Kazunobu had no assistants and died before finishing his project, but Mr. Murakami used his baroque and tragic imagery to create a new work filled with his own spectacular sense of color, and the skilled Japanese craftsmanship his prodigious team of assistants has perfected over the past decade.

What did I really feel about the new work? It’s epic, spectacular, complex and awe inspiring, but the reference to tragedy and finding ways to deal with it is less interesting to me than what I see in Mr. Murakami’s earlier works, the ones with the cartoonish DOB figure morphing, destructing, vomiting paint or even simply standing in a strange forest of mushrooms, hidden references to atomic bombs. Mr. Murakami always hid in his work a proud hostility to the West, and watching so many people misunderstand it over the years by seeing only “happy” cartoon figures has added to the subversive mechanism the artist had succeeded in disguising and selling to an unwitting global art audience. But now that he is an established star, he can no longer be angry, so he’s chosen to be inspirational. This type of transition is perhaps inevitable with any late midcareer artist who achieves huge global success, and we’ve seen it in other artists in different ways.

Back in 2007 Mr. Murakami had already drawn from Japanese art history in the wonderful “Daruma” paintings, and this marked an important transition in his work. Though these historical references draw me in, as does the amazing painting technique his team has absolutely mastered (the work is finer than that on a new Jeff Koons painting), I don’t feel any tension in the subject matter, and I don’t want to be wowed by technical prowess. So, with The 500 Arhats, I marveled at the fabulous dragon, and I wasn’t immune to the wrinkled faces of the monks and their rippling robes saturated with exquisite otherworldly colors and sparkles. Maybe I have an internal alarm that goes off whenever art is characterized as “the biggest,” the “smallest,” “the heaviest” or “the lightest,” because marketing enters the dialogue in an obvious way. As a child every year I would go see the “Greatest Show on Earth,” the Ringling Brothers and Barnum and Bailey Circus, and, not coincidentally, the “Ego” show includes a circus tent, one in which Mr. Murakami played his animated movies and exhibited some of the “art toys” his company Kaikai Kiki mass-produces. On the whole, the show has plenty of ego. It even begins with a humongous inflatable balloon figure of the artist beckoning you to enter the museum. This is impressive stuff and will definitely prove a crowd pleaser that people from all over the world can appreciate, and perhaps find inspiration in.

But is the big painting here his best work? Everyone seemed to like it, even me, and it was a good choice for a show in a Gulf state, with an uplifting international message that all can grasp. The works I favor, though, are the ones that come from the angry Murakami, the mean one who was unpopular in his native Japan because he elevated their subculture to high art. That was a Murakami with something to prove at home and a whole Western art world to conquer.

But we’re now in a different time and a different moment in the artist’s career, and the subculture is the culture, which somehow reminds me of the famous koan written by the great Zen master Hakuin: “Two hands clap and there is a sound; what is the sound of one hand clapping?”