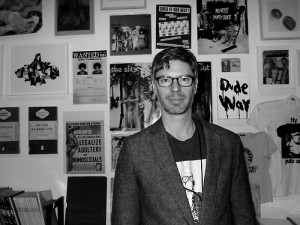 The relationship between a dealer and a client is sometimes all business, but it can also be about friendship. John, you were one of the most interesting friends anyone could have had because you were a total original. You were the only one to deal in a manner that informed both the book world and the art world. There was no one like you, nor is there likely to be: you created your own niche and your own style.

Let’s face it, art-book collecting has never been particularly exciting or sexy, but you succeeded in making it so because who else sold stuff like the original movie script of Mario Puzo’s Godfather or Charles Manson’s insane letters from jail? Your intimate 64th Street gallery was always a discovery. You hung strange collages on the walls and sexy photographs and Sex Pistols paraphernalia, but stepping into your office was even more special. The door was always closed, and each time I visited I’d ask if I could look in, and you’d reluctantly say: “Sure.” I’d look around very carefully at everything, the way I do in an artist’s studio, hunting for clues to how your mind works. Inside I’d find an ever-changing universe of Weegee and Betty Boop photos mixed in with vintage porn and signed Warhol soup cans and shopping bags; it was always a visual feast and the highlight of my visit, whether I bought anything or not.

Remember how I found out about you? It was during a visit to Richard Prince’s studio in upstate New York where I first ogled all those amazing rare books in beautiful binders. He’s not a big talker, so he didn’t say where they came from but I found out, and showed up one afternoon at your bookstore gallery in a walk-up on East 64th Street. I was immediately impressed. You sold me every Richard Prince artist book ever published, in special editions, both signed and unsigned, some of them with collages and drawings and all sorts of cool stuff. How about all those Warhol books in every variation, even the most rare in both hardcover and soft cover.

Then there were all the young, offbeat and outsider artists you showed and championed, and the wonderful artist’s catalogs you wrote and designed for the famous, the infamous and the ones you believed in. Who can forget those hilarious e-mails you sent out for every opening, acting as if something illegal and suspicious was happening? Who’s going to be able to continue that? (Remember the one you sent out on Thanksgiving?)

I’d like to remind you that I never saw you take a vacation–as a matter of fact I can’t remember you ever going anywhere, except to your house in Easthampton’s Springs every Saturday at 2 p.m., returning promptly to your 64th Street gallery/office on Tuesday. I never even heard of you going for a swim or doing sports of any kind (though I’ve been told you were good at baseball!) so I’m shocked to hear you had a snorkeling accident. All your buddies out East are surfers, but damn it I never even saw you in a bathing suit!

Athlete or not you were a handsome guy, with a wry smile on your face, stubble on your chin and a twinkle in your eye; how could a rare book dealer who specializes in vintage pornography not charm me and everyone else? You certainly charmed your beautiful wife Maria. She always had that loving look in her eyes.

Remember all those great dinners we had, full of heady discussions? The 50th birthday party we were at just before Christmas? Damn you, McWhinnie, I don’t want an ending like this. It’s not some big polemic we can fight about and then laugh off. We’re all going to miss you. The art world has lost someone really important and I just wish you could just have stayed home this holiday so we could have spent some more time together.

You were the expert on the Beat generation, and you knew everything about every 20th century first edition ever printed, from The Great Gatsby to The Maltese Falcon to On The Road. I didn’t get a chance to buy any of them; the field felt arcane and too brainy to me, or maybe I was a little cheap and a little slow, but I would have gotten there, if you just gave me a little more time. John, how do I finish what we began? I promise I’ll collect more art books, or the first editions and the photos, whatever you say, just don’t let it end like this.