NOT PUBLISHED BY THE NEW YORK OBSERVER 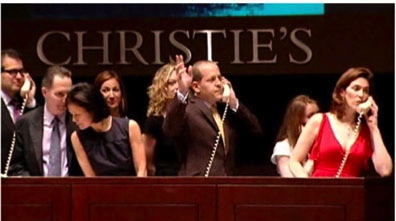 Auction season is once again upon us, time to write about the weighty volume of art for sale, and wonder what people will pay for it.  I’m simply overwhelmed by the quantity of valuable artworks that need to sell (though much of it has essentially been pre-sold, through third party guaranties). Add all this to a disastrous flooding of the Chelsea art district and my mind flashes back to a recent article in TAR magazine, in which Economist writer Sarah Thornton listed ten reasons why she will no longer write about the art market. Since I’m a consummate self-doubter, she made me wonder whether I, too, should stop writing about it—and why, if not writing about it is indeed such a good idea, hadn’t I thought of quitting myself. Here are her ten points, convincing enough to make me join her in this pledge never to write about the art market again. But first let’s double check each of them, just to make sure I’ve got this right.

1. It gives too much exposure to artists who command the highest prices.

Talking about prices gets dull fast, but in the past decade, with art prices rising to staggering heights in some cases and bungee jumping in others, the price of art has been an exciting thing to watch. Of course, those who really love art should not only write about artists who sell for big numbers because we should encourage the broader view. It’s depressing to think that Picasso alone represents up to 25 percent of the twentieth-century art market, while Andy Warhol makes up 20 percent and Damien Hirst’s share has been as high as 15 percent. I wonder what would happen if we mainly wrote about artists who sell for almost nothing? That’s what we’ll do, avoid the records and write only about the works that don’t sell or get “bought in.” Genius!

2. It enables manipulators to publicize the artists whose prices they spike at auction.

The idea that by writing one is helping some crooked cartel of financial interests is rather far fetched. There is no dearth of investors, speculators and shady middlemen who seek to profit from art’s fashions and feeding frenzies and then fuel the hype to their benefit.  She’s right I guess, and why should I help them unless I’m in on the scam? (Oh, right—I am!) Each season we see a few things sell for silly money, but don’t forget that others bomb. I don’t think art prices are any different than some stock prices. Do you really think Facebook is worth more than McDonald’s?  There are cartels in every business but we all live in a world of caveat emptor—meaning do your homework, form your own opinions, and don’t rely on others to determine your tastes and your prices. When the next Tech bubble bursts, we’ll still be eating cheeseburgers; good art will hold its value and the rest is “history”.

3. It never seems to lead to regulation.

Who needs to regulate a little market in which no two items are alike? People who don’t understand art collecting, that’s who! Believe me, innocent moms and pops don’t buy art. Forget the smart sounding conspiracy theory, there’s no victim here. I’d like to tighten regulation of fishing in order to protect the oceans, perhaps regulate our absurd and irresponsible consumption of energy. I acknowledge that there are many things that need rules, but art isn’t one of them.

4. The most interesting stories are libelous.

Ms. Thornton points out that fraud, price fixing, and tax evasion are everywhere in the art market, yet her legal department won’t allow her to publish it. But are these illegal practices endemic to the art world alone? Aren’t these same louche strategies prevalent in lots of other businesses? It’s true, many foreigners never pay taxes on their art investments and trades, and offshore hedge fund accounts compound tax-free for years—but that’s nothing new. Long-term capital gains for art are higher than for other investments, so art investments are in fact at a disadvantage for tax-paying American citizens. Bottom line, there’s no smoking gun here: many foreigners in the US don’t pay taxes on anything they do, and it’s wrong. In fact, silly me, what have I been thinking? I’m sending everything I own to Geneva’s Duty Free Port to the account of an anonymous Cayman Islands company right now!

5. Oligarchs and dictators are not cool.

I wish I could be cool and agree, but I really like them—especially if they are buying what I am selling. Sadly, they usually are not. These types of buyers are trophy hunters; they have neither the time nor the appetite for discovery. Art, for them, is strictly one of the spoils of their pecuniary success. Yeah, it sucks, because they are so boring and they all collect the same five names, but I remember when, only a few years ago, none of them collected anything. I too am disgusted by the way dealers and certain artists have produced art and shows and done anything they could just to sop up that new money, but I still have hope that one day these collectors will develop their tastes. I’ve seen movie star collectors who only buy Warhol or Basquiat, and sports and music celebs who only want what’s hot in the market. Are they any better? That’s why I don’t care if I’m not cool because it’s no longer “cool” to be cool.

6. Writing about the art market is painfully repetitive.

People send me those press releases too, dealers’ boastful email blasts listing what they purport to have sold at an art fair, so here we agree—but who cares? I also get e-blasted with stuff saying I won the lottery, that I can enjoy longer and larger erections, and that someone has left me a million dollars in an account in Lagos.

8. It implies that money is the most important thing about art.

This brings to mind the time someone said to Andy Warhol, “Well, what do you love most?” To which he replied,  “That’s how I started painting money.”

9. It amplifies the influence of the art market.

Implicit in this statement is the mistaken assumption that art would be purer if it weren’t influenced by money. Artists need money—and most of them don’t read about the art market. Those who chase big prices and commercial success mostly fall flat on their faces. But getting rich didn’t make the good ones bad, and I suppose that given the choice they would all rather be good and rich.

No argument here. It’s a bit tragic, but, then again, no one has forced us to write.

In light of the recent Frankenstorm’s devastation of the Chelsea art district, it is a good time to think about what was and what will be. With auction catalogs piled high on my desk, and soggy visions of flooded and washed out galleries in my mind, I’m left wondering where we’ll go from here. Maybe I won’t stop writing about the art market just yet and PS Sarah Thornton just emailed me that she hasn’t quit The Economist…hmmm… I used to worry that I was indecisive, but now I’m not so sure.