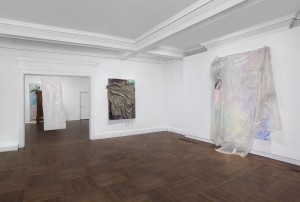 As 2011 grinds to a halt, it’s time again for the ol’ “top of the pops” list. Here are five great shows, some special mentions and my personal New Year’s resolution, which I hope you will read while drinking a tall glass of eggnog.

Back in February, I wrote that Mr. Hammons’s exhibition was an instant contender for best of the year, and over the past 11 months no other gallery show could catch him. The idea of “homeless” paintings—canvases wrapped in tattered tarps and garbage bags—being offered to wealthy collectors in L&M’s Upper East Side townhouse turned out to be the perfect metaphor for all the conflict of the moment. The show was misunderstood by some, but was nevertheless an instant hit, and the biggest piece in it now hangs at MoMA. Mr. Hammons is often referred to as the leading African-American artist of our time, and we need to drop that qualifier: Mr. Hammons is simply one of our best.

2. “The Steins Collect: Matisse, Picasso, and the Parisian Avant-Garde,” at the Grand Palais, Paris

This show, which began its tour in San Francisco in the fall before arriving in Paris, is coming to the Metropolitan Museum of Art in February, and a good thing too, because it’s fascinating. Leo Stein and his sister Gertrude (the writer and Paris salon doyenne) were patrons and friends of Picasso and Matisse and had amazing collections of both artists. The exhibition brings it all back together and lets you dream about what it must have been like to inherit a modest Pittsburgh fortune right after the turn of the century and become an ex-pat in Paris, hanging out with Hemingway, Ezra Pound and Guillaume Apollinaire (did you see the Woody Allen movie Midnight in Paris?). After a few years Leo had a change of heart, and flipped all of the artworks he’d amassed, deciding to move to Italy and focus on Renoir. Even still, he goes down as one of the great collectors of modernism.

3. The Ronald S. Lauder Collection at the Neue Galerie

This private museum is always worth a visit, in part because it has the best museum restaurant in town: I recommend the Austrian sausages with spaetzle and the hot wine. Many of the shows have been great too, but the current one, featuring works from Mr. Lauder’s personal collection, is the Neue at its best. Mr. Lauder’s amazing Cezannes, his sensual wall of Egon Shiele drawings, and the blockbuster portrait of Adele Bloch Bauer by Gustav Klimt are all on view. There are also beautiful suits of armor, and the most amazing corner of Brancusi sculptures you’ll find almost anywhere (outside the Philadelphia Museum of Art). His Kandinsky painting is arguably the showstopper, but it’s one of many marvels this exhibition offers. It’s up through April 2—don’t miss it.

Alisa La Gamma, the curator of African Art at the Met, is a strong and fresh voice in a fascinating field that feels sleepy and foreign to far too many art viewers. But African art has been a source of inspiration for modern artists like Brancusi and Picasso, and serves as a touchstone for artists to this day. It’s hypnotic, it’s powerful, and it’s magic. The show combines beautiful 19th-century postcards that show us the last glimpses of tribal kings and queens combined with the most amazing Bangwa figures, Tchokwe chiefs and Hemba sculptures you will ever see. This field can feel tense, because the objects exhibited were taken out of Africa during colonial times and they reside in European museums and private collections as spoils of century-old exploitation, trophies of adventurers and explorers. But that’s sadly the case in many fields—it is part of each object’s history. What counts is that the Met has brought together the finest examples from public and private collections all over the world, with a wonderful sensitivity and respect for the history of African culture. This inspiring show is only up through Jan. 29, so hurry and have a look.

Dieter Buchhart, who curated the Basquiat show at the Beyeler Foundation two summers ago and the Beyeler’s Edvard Munch show before that, curated for Acquavella a Braque exhibition that was, for myself and many others, a revelation. This beautiful show challenged the prevailing notion that Braque was good only in the early years when he was a Fauvist, and when he developed Cubism with Picasso (or perhaps Picasso stole it from him). Though Braque suffered a head injury in the World War I and for the rest of his career was lost in the shadow of Picasso, this show proved that there’s a lot more to Braque than most of us ever knew. The best revelations to me were his late paintings, where early Cubism’s monochromatic bent turns into colorful shapes and variations in scale and perspective that make us see him and his world in a whole new way.

George Condo’s “Mental States” at the New Museum. For some, the painter never went away, but the New Museum show puts Mr. Condo center stage. He’s back in a bigger way than ever.

Maurizio Cattelan’s “All” at the Guggenheim. Amid the barrage of criticism and misunderstanding surrounding this artist’s show one thing was missing: an appreciation for the risk and the real mettle it took to hang 20 years’ worth of artwork from the ceiling. Say what you will, this is a show we’ll still be talking about in 20 years.

Tauba Auerbach, “Tetrachromat” at the Bergen Kunsthall, Bergen, Norway. Ms. Auerbach is a leader of the “neo-op-art” movement, of young artists creating optical illusions on the canvas through various automatic and semi-automatic techniques. She’s ahead of the pack and this show proves why: each painting is more beautiful than the last.

Art is for all of us to enjoy and celebrate and though I love parties as much or more than anyone, the “scene” of today feels more and more like it has overwhelmed the art we’re seeing. Everyone in the art world knows it, whether they admit it to themselves or not, and they feel uneasy about it: it’s the monkey on their back. The social events surrounding art fairs have turned them into party carnivals, supplanting connoisseurship, sophistication and knowledge with the trendy and the trivial. This isn’t news. Dealers participating in the fairs know this and many of the collectors know it too. On the occasion of Art Basel Miami Beach a few weeks ago, I spelled it out in plain English, and received a barrage of ad hominem attacks, many behind my back. But why should anyone react so strongly to mere words unless they feel threatened by the truth in them? I called for the absurd, a boycott of the fair, but I still went to Miami Beach, as I always do, because I’m not different or better than anyone else there. We are all complicit in this “scene.” The only hypocrites are the ones who deny this. This theme in the art world of today will not go away, and like it or not, it will be addressed in the coming year, which brings me to my New Year’s resolution: to be who I am and to say what I feel, because as Dr. Seuss once said, “… those who mind don’t matter, and those who matter don’t mind.”