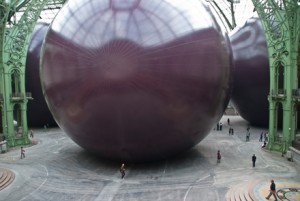 The annual summer art tour is finally over. It was bookended by the Venice Biennale and the mega-fair Art Basel and included a few stops in between. Basel was packed with collectors and dealers and was very successful, with art changing hands at the fastest pace we’ve seen since ’07. If the art market isn’t 90 percent back to the good old days it’s damn close.

But I don’t obsess over art fairs; instead I go to museums where there’s nothing to buy but plenty to learn.

In Basel, the Beyeler Foundation is always my first stop. Director Sam Keller followed up last year’s Basquiat blockbuster show with a tag team extravaganza: “Constantin Brancusi-Richard Serra.” The show included so many rarely seen works that it wowed everyone … everyone except me.

Brancusi defined the abstraction of form that announced the beginning of modern sculpture, and the show presented multiple versions of signature works like Bird in Space and The Kiss. My favorite was the five-foot-high wood sculpture Adam and Eve, in which two abstracted gaping mouths over a phallic form sit on top of a zigzag pedestal that combines Coptic architecture with influences from African Lega sculpture. Unlike some classic works that are overexposed, Brancusi’s sculptures never look kitsch, not because they defined history, but because their sober reduction of form gives them a powerful religious aura. Mr. Serra, too, is an artist I grudgingly love. Although his work is somewhat repetitive, it succeeds in being at once heavy and light even though his scale is monumental: he makes you feel like his art is designed to last forever, and it probably will—the beautiful Corten steel it’s made of weighs tons.

Despite being shoved into the Beyeler’s low-ceilinged galleries, the amazing Serra works looked good, but the pairing of these two great artists didn’t work for me. I see the benefit of refreshing century-old works by mixing them with those of a living master, but with these two I don’t understand what was achieved. I asked several dealers this question and read the exhibition catalogue but the only affinities I could find were the medium—sculpture—and the fact that both artists’ sculptures involve precarious balance: Brancusi’s Bird in Space looks like it’s just on the verge of tipping over and Mr. Serra’s huge, twisting, steel slabs appear like they are just about to topple over, like giant dominos.

On the whole, the pairing reminded me of last year’s failed blockbuster The Tourist, a film starring Angelina Jolie and Johnny Depp in Venice: both stars were hot, but they had no chemistry. If a fresh dialogue was the point of the show, I think a Brancusi-Carl Andre match would have worked better. Mr. Andre’s still the dark and unsung hero of American minimalism. He was tried and acquitted of murdering his artist wife, Ana Mendieta, in 1988 and most museums won’t touch him, but his works are sober and powerful, the wooden railroad ties he uses are no doubt directly inspired by Brancusi, and his metal floor pieces wouldn’t tower over Brancusi’s more delicate scale. Apparently Mr. Andre even knew Brancusi in the 1950’s. Mr. Andre’s moment in the spotlight will have to wait until 2013, when the Dia Foundation gives the 76-year-old his first American retrospective in 40 years.

Paris is my favorite city, so everything there looks better to me. This was sadly not the case with “l’Art de l’Automobile” at the Musée des Arts Décoratifs, an exhibition dubbed “masterpieces from the Ralph Lauren car collection.” I’m a vintage car lover and I’ve owned some pretty nice Italian and French pre- and postwar rust boxes, though nothing as good as what Mr. Lauren has. I drive mine every weekend, and his look like they haven’t been started in a decade: the collection is probably the most overrestored and underdriven group of blue-chip collector status symbols in the world.

Unlike their European counterparts, American collectors are known to buy only perfect examples of just about everything. They won’t buy an African sculpture with a broken arm or a Khmer torso if it’s headless. They don’t want imperfections or aging in their Art Deco, or a Mondrian painting with its original cracks and patina. And so, when selling to the Americans, dealers restore the arms and fill in the paint on the Mondrians. Like them, Mr. Lauren has overrestored his cars, with chrome shinier and leather more supple than any car offered in the past century, including those of the great Ettore Bugatti. The fact that American collectors have favored the overrestored stuff for decades says something about our American culture: we refuse to accept things, as the French say, “dans son jus”; instead we clean them up and present them devoid of aging and wrinkles (think face lift).

We want the old stuff to look shiny and new, even if it’s a lie.

Ralph Lauren clothes, which are so successful you can find them from Europe to Asia, have a similar point of view: they are smart and beautifully made selections of other people’s design. Whether British or American classics, they are always high-quality copies. But copies and overrestoration are not for me; I like cars and paintings with patina. When something is old but doesn’t show its age, I’m suspicious. Sources tell me that Mr. Lauren’s fabulous Ferrari 250 GTO is actually a rebodied car with period chassis and motor, and that his fabulous Bugatti Atlantic is reupholstered in leathers that are not period options, meaning the chrome and paint job are not what Bugatti offered back in the day. I was also disappointed not to see a fabulous Ferrari Spyder California, or a Jaguar C-type, or some eccentric choices in the display. Then again, maybe I’m just too jealous of his Jaguar D-type and gorgeous XKSS to think straight.

In the Bibliotheque Nationale de Paris is an interesting Richard Prince show through June 26 titled “American Prayer,” which combines his extensive book collection from what he calls the “Beat-Hippie-Punk” generation with some of his newer book-related art works. It includes important dedicated editions of Jack Kerouac’s On the Road and Hunter Thompson’s Fear and Loathing in Las Vegas as well as amazing hand-written letters from Jimmy Hendrix to his father, ones in which he complains about not getting paid or not even getting a gig.

Mr. Prince also uses the show to hang his new works made from pulp-fiction novels alongside their original cover art, as well as some of his “celebrity” works. His recent art production has been prolific but many question its quality. This show, carefully curated by the artist’s friend (and collector) Bob Rubin, seeks to strengthen the artist’s credibility by showing the complex collection of material from which he draws his inspiration. But the show really works only for the Prince-obsessed who collect his work, like me. As great as the collection is, books are something you need to hold in your hands and feel. Placed in a vitrine, they are no longer books; they are lifeless objects. Art-loving British starchitect David Adjaye built a beautiful shingle house inside the space to house part of the show and installed the rest with his elegant touch (I did my house with him too, coincidentally). The end result is complex and interesting, but I couldn’t help feeling that I was being pushed to a foregone conclusion: that this artist, who became so famous for the large prices achieved by his paintings, is much more than a market phenomenon. I agree with the message but I like to draw my own conclusions.

Thinking about art and how we experience it, whether individually or in large groups, drew me to the Anish Kapoor installation Leviathan at the Grand Palais. The fantastic Grand Palais is a soaring, glass-roofed, steel-skeleton structure built for the Universal Expo of 1900. In the days before good electrical lighting, its glass roof allowed light to get in so that large groups could gather and see the exhibits. In recent years, France invited Richard Serra, Anselm Kiefer and Christian Boltanski to do shows, and luckily I saw and enjoyed them all, but Mr. Kapoor’s installation will be the standard by which all future shows will be judged: it was really amazing.

I’m not a fan of Mr. Kapoor and loving this show underscores why. Though over the past years he has become one of the top-grossing artists in the world, his brand of postminimalist sculptures with Buddhist overtones doesn’t work for me. I’ve studied some Mahayana and Hinayana Buddhism and I’ve been to Dharamsala to visit the Dalai Lama, so the infinite feeling of the one and the many that his commercial works evoke falls flat for me, about as hollow as the “om” they chant at the end of a yoga session. And yet when Mr. Kapoor creates monumental public artworks—like the 110-ton reflective steel blob (a.k.a. The Bean) he did in Chicago’s Millenium Park, or Marsyas, the giant trombone, vaginal in appearance and named for a satyr, that he installed in the Tate Modern in 2002—he achieves transcendence. Leviathan is a huge inflated stomach and intestine, entering which makes you feel you have just been swallowed. The viewer then exits the interior space and tours the outside of the piece, where the three enormous balloon wombs are so big that they fill the entire 135,000-foot space of the Grand Palais. What Leviathan means I don’t know, and don’t care. The strong emotions and amazement it evokes in the audience make it one of the most successful public works done anywhere by anyone. I’ll never be able to look at another Kapoor without thinking of this incredibly successful installation.

If by now you are wondering what an overdone 1962 Ferrari GTO, an exhibit of an artist’s book collection and a sculpture over 100,000 feet in scale have in common, don’t. But they did teach me how dependent what we see is on how we see it: the shows I was looking forward to disappointed me because of their presentations, whereas something I had no interest in was the most successful art I’ll see all summer. I’m not that interested in the pairing of art with books I can’t touch—though a few years ago I was inspired by Mr. Prince and began to collect books myself—or in gawking at beautiful cars that don’t get driven. But Mr. Kapoor’s Leviathan is perfectly designed for the mass audience it satisfies and proves that he is a master of the monumental sculpture. If an artist has a great collection of books, that doesn’t prove that his art made from books is any good, while success with large scale work doesn’t mean that smaller scale works will also be successful: a jack of all trades is, after all, a master of none, and even the world’s greatest artists can sometimes look like jacks.