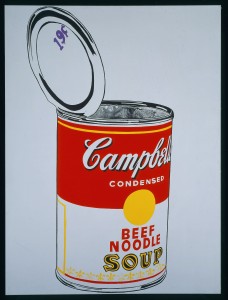 The Metropolitan Museum’s “Regarding Warhol” exhibition groups artworks by 60 artists around works by Andy Warhol, as an homage to his far-reaching influence in the art world. The result is closer to a mob scene than to any semblance of meaningful dialogue, and it wasn’t hard to predict that critics would slam the show—slamming this show was, from the beginning, an easy layup. By this point, it’s almost de rigueur in New York’s smarty arty circles to wrinkle your nose at “Regarding Warhol,” which, as you can imagine, makes me want to like it. And so I do … but still, I don’t.

In the early 1960s, Warhol, as everyone by now knows, had an epic breakthrough when he painted a series of Campbell’s soup cans, and although Los Angeles’s fabled Ferus gallery, one of the first to show Warhol, sold almost nothing, in the end its show made art history. These days, it looks to me like Warhol would have been better off painting ketchup bottles, because today canned soup is rather passé, whereas ketchup goes with just about everything: ketchup on fries, ketchup on burgers, ketchup on eggs, spaghetti, meatloaf, rice, potatoes … you name it. And, like ketchup, these days Warhol is poured on just about everything.

When I mentioned the Met show to my psychiatrist, he asked me, “Do you even like Warhol, because I don’t.” “No,” I told him, because you can’t “like” someone whom you revere. I’m fascinated by Warhol’s work, both the good and the bad, and it’s funny to think now about how Andy never particularly liked me. I knew him well in ’83 and ’84—we went out all the time because my girlfriend Cornelia was one of his BFFs. He loved her because she was blue-blooded and wild, but he had little interest in me, since I wasn’t gay, and I wasn’t famous or especially rich. No matter, I was all of 21, and following Andy around was fun. We’d dine at Halston’s Paul Rudolph townhouse with Victor Hugo and Studio 54’s Steve Rubell, or go with a spliff-smoking Jean-Michel Basquiat to see Michael Jackson’s Victory Tour in Madison Square Garden. I never succeeded in getting Andy to say much more to me than “great” or “yeah,” and believe me I tried, though he did once come to a dinner party at my parents’ house accompanied by Boy George and a minor pop star called Marilyn who wore a long white party gown. He/she was a great-looking androgynous cross-dresser but I still didn’t take him up on the suggestion that the two of us go for a quick cruise in the water-ski boat.

The most I was ever able to get from Andy was the signed T-shirt he gave me for my birthday (he was about as generous with gifts as he was with words), and eventually I framed it. His own celebrity, and his obsession with the famous, the rich and the decadent was fascinating, though his art, if you weren’t serious about it, made him look like a social hack who was more than half vampire. Years later, my experience of him, and his influence on me, would fuel my own interest in art and its culture—so, like many in the Met’s show, I owe him an enormous but unexpected debt of gratitude.

Today Warhol is virtually ubiquitous—earlier this year, there was, for instance, a good “Abstraction after Warhol” exhibition at the Museum of Contemporary Art in Los Angeles—but too much of a good thing gets stale, and monotonous. The artist Ash

ley Bickerton recently remarked to me that as much as he once loved Warhol, the sheer ubiquity of his cynical lens on the world has become suffocating. He added that the over-saturated feeling isn’t confined to Andy—take the ruling minimalist, Donald Judd: once you’ve seen his boxes everywhere you begin to, as Ashley put it, “wonder if it’s all just a load of tin.”

The many Warhol masterpieces in the Met’s show can never get old, but far too many of the other artists the curators selected make no sense—their work bears no relation to the work of Warhol, apart from the fact that, like him, they make art. Sorry, guys, but I don’t see any meaningful connections between Andy and Vija Celmins or Andy and Robert Gober, nor do I perceive significant links between Warhol and the painter John Currin. How about an entire room dedicated to Ryan Trecartin? Was that a practical joke (Andy would have liked that) or a feeble attempt to be “edgy”? But it’s just too easy to criticize this show; everyone already has, and so it’s no longer all that interesting to do so. What interests me more is trying understand why the Met would stage a show like this. What’s really at stake for the museum? Let’s try and read the tea leaves …

The Met is possibly the greatest museum in the world and certainly the best we have in this country. Walking through it provides us with a good look at the long and diverse menu of global art history, from Greek vases and African fetishes to Egyptian temples and Alexander McQueen gowns. But let’s not forget that all this costs money, and plenty of it. Today the wealthy are into contemporary art as never before, and contemporary art is an area that, in recent years, has been the Met’s weak link.

In the days of the great curator Henry Geldzahler (not coincidentally, a champion of Warhol) the Met did famous and influential shows like 1969’s “New York Painting and Sculpture: 1940-1970,” but those days are long gone. The shows the Met has done more recently, with Jasper Johns and Neo Rauch, and the special sculpture displays on the rooftop, are all well and good—and the museum did a terrific survey of the Pictures Generation of the 1970s and ’80s a few years ago—but they are far from making art history. And its postwar galleries are among the least-inspired spaces in the place; they are in need of a major refurbishment. To update and improve things, they’ve brought in a new modern and contemporary art chairman, Sheena Wagstaff, a respected curator from London’s tony Tate Modern. But getting the job done will require substantial patronage. Where will the Met find the financial support that’s needed? Patrons of contemporary art have been providing plenty of support for MoMA, and there’s some good spillage left over for the Guggenheim and the Whitney, but there may not be as much after the Met enters the fray. The landscape is shifting: the Whitney is moving downtown and will rent out its Marcel Breuer building to the Met for nine years, thereby letting the hungry old fox right into its Upper East Side chic

ken coop. By the time those nine years are up, the Met will have redone its own contemporary galleries and will be in a perfect position to mount great shows and compete for all the uptown patronage that has historically gone to the city’s other institutional players.

I see the current Warhol show as a strategic move for Met director Tom Campbell. What better way to attract these new patrons than to stage a far-reaching show that brings in all the top contemporary galleries? What could be better than a fabulous Warhol exhibition, one that mixes in most of the top artists of the past 50 years?

If you read the list of blue-chip lenders and galleries (full disclosure: I myself loaned art to this show) you will see that the strategy has worked like a charm; after all, who wouldn’t want to lend art to the museum that houses the Temple of Dendur and sundry masterpieces from the Middle Ages to today?

Then there are the credit lines on the wall labels, which tell their own story. Those of us who read them do so to see who owns what, and whether individual collectors are named or billed simply as “private collection.” Then there are the requisite loans from other museums and, of course, the well-oiled tag line “courtesy gallery X”, which is usually a red herring meaning the work in question is for sale. Many of the works in the Met’s show have been loaned (or perhaps the better word is consigned) directly by collectors or dealers we are all familiar with—there are few surprises.

One hopes this practice of allowing dealers and collectors to lend to museums “courtesy gallery X” will one day stop. There are two things wrong with it: firstly, it’s free and unnecessary advertising for the galleries, and secondly, it looks like the stuff on view is for sale, which leaves a bad smell in the air. Can you imagine a car show where half the cars have the owner’s name and number scribbled on the windshield? I’m all for commerce and open access to art—that’s what galleries are for—and I’ve even opened my own, but museums serve a different and important function. They should maintain appearances by at least trying to keep the commerce outside their pearly gates.

Regarding “Regarding Warhol,” the Met has delivered a must-see show. Can one ever see enough great Warhol? As Shakespeare put it, “Can one desire too much of a good thing?” The critics are right, this show is flat (or perhaps “superflat,” as Takashi Murakami writes in the catalog). But nonetheless, the museum’s strategy makes sense: this exhibition prepares the Met to compete for funding that is currently earmarked for the MoMA, the Guggenheim and the Whitney. More power to it, and welcome to the chase. I hope that in the future it will use its new power wisely, and be willing to take chances, make risky choices and avoid shows as predictable and calculated as “Regarding Warhol.”