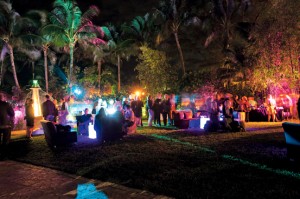 I’m not going to Art Basel Miami Beach this year. I’m through with it, basta. It’s become a bit embarrassing, in fact, because why should I be seen rubbing elbows with all those phonies and scenesters, people who don’t even pretend they are remotely interested in art?

And so, here it is, in print, just so no one has to ask me again. Here are all the things I’m absolutely not going to: Tuesday it’s a lunch with Ferrari chairman Luca di Montezomolo (nice name!), then there are cocktails for artist Teresita Fernandez (I like her, she’s pretty, she’s Cuban and she won a MacArthur fellowship), then there’s my friend Lapo Elkann’s Ferrari party, which I’ll have to leave to make the dinner Delphine Arnault is having (she’s the daughter of the owner of LVMH, no less) for Berlin-based artist Anselm Reyle. He’s just designed a line of bags for Christian Dior, he’s very handsome and smooth, his work is rather out of favor now but I think he’s on his way back (though it may take a while). Then I’ll probably have late-night drinks at Maria Baibakova’s, because she’s young and cool, she’s Russian and she has a great apartment in Miami, and, oops, I forgot my promise to show up at the Rubell Collection opening party sponsored by US Trust.

On Wednesday there’s a W magazine party for hot Brazilian artist Beatriz Milhazes, then there’s the Galerie Eva Presenhuber dinner (she has good artists, as always) and there’s also a dinner at some wonderful Mexican collector’s house where I go because I love authentic Mexican food. Somewhere there will be a raging White Cube party, and Emmanuel Perrotin will once again bring over Paris’s Le Baron nightclub, where, late into the night, dealers will come hunting for a one-night stand. On Thursday, if I’m still pumping, there’s a dinner for Berlin gallery Contemporary Fine Arts (those Berliners know how to party), and then there’s Simon de Pury’s Phillips Auction House party (it’s crazy and they have fun Russian partners), then there’s Aby Rosen’s mega-dinner party at his W hotel, followed by a debauched party in the hotel nightclub hosted by party boys Stavros Niarchos (very internationally cool), Alex Dellal (major London hipster) and Vito Schnabel (a fast talker who represents some promising youngish artists).

What’s the fun of being invited to so many things? What ever happened to the days when the best parties were the ones I had to crash? You want to know what happens over the weekend? Well, I can’t be bothered with Friday or Saturday, because if I did I’d end up in rehab.

As difficult as this is to imagine in today’s climate, I used to go to art fairs to buy art. Remember when we’d go to Frieze in London or Art Basel Miami Beach to find great works by artists we were collecting, or to discover new ones? Art fairs in their first few years were the gallery world’s great equalizing playing fields, where dealers from all over the world could show up and catch your eye with something powerful, something exotic or something undervalued.

International art fairs blossomed over the past decade, and I’ve attended every single one; I’ve witnessed their decline first hand. In the early days galleries would compete and bring great material—not just to sell, but also to gain credibility and prestige relative to their peers. At a time when the auction houses were laying out large guarantees on mega masterpieces and pouring lots of money into flashy catalogs and pumped-up marketing budgets, the art fair was an auction-style environment where small and mid-size galleries could take booths just as big as those of bigger galleries, creating a level playing field from which to launch their artists. Collectors could feel they were getting a full survey of what was available that year in the art market; comparing values and tastes was made easy since you could value-shop different galleries and end up comparing a million-dollar Neo Rauch in one booth with a million-dollar Mark Tansey in another.

But today, the freshness of new discoveries has mostly evaporated because there are so many international fairs in a single year and the galleries send out the list of the available works they’ll be showing a week or two in advance, so people like me get to see what’s on view in Art Singapore, Paris’s FIAC, Italy’s Artissima or the Abu Dhabi art fair. What’s worse, the galleries aggressively pre-sell everything they can before the fair opens. Why does that matter? Because I regularly receive the email blast of works for sale from several galleries, and twice, for instance, I’ve “put on reserve” the fair’s choice Karen Kilimnik painting only to get an email from her gallery stating that someone else will buy it sight unseen so I must “shit or get off the pot.” I refuse to buy an artwork I haven’t seen in person, especially in this fragile environment, so in the end the gallery runs me over, selling it to the guy who’s willing to commit to it blind. I can’t really blame these galleries, because this has become the new status quo, but I’m not enjoying this game of pre-selling the best pieces—it’s worn me out. There are no longer any civilized rules of protocol in the email blasts other than “sell, sell, sell” and do it as fast as you can. As with most serious art collectors, I’ve been to too many fairs, I’ve seen the same stuff over and over again for years. It has lost its luster and much of its purpose, so why should I bother? It’s high time I start making more studio visits, and visiting more emerging galleries. It’s work but these days that’s the only way to get ahead.

You say “who cares? The main reason people go to Miami isn’t the art. It’s the parties, the schmoozing, and the opportunity to score some real estate in The New York Times Style section.” Not me. I’ve always gone to art fairs to see the art, but even that legitimate interest has now faded, because I’ve seen enough art-fair art—the stuff that artists self-consciously produce to show and sell at fairs—to dry out a thousand eyeballs. I don’t care for it. It’s merchandise, it’s eye candy, it’s commercial without enough real content, and, in the end, it’s just plain boring. Every year more and more people flock to Art Basel Miami Beach, people who have no interest in art. They show up to go to parties, drink free cocktails—the whole boondoggle of free fun. Meanwhile, it’s the real art collectors who are paying for these parties by buying expensive art works from the galleries: it’s our money that is underwriting all this insanity.

This year marks the 10th anniversary of the Miami fair, and it’s an anniversary we shouldn’t celebrate (I’m going to celebrate the second anniversary of my column in this newspaper at home). Let’s agree to boycott the whole thing; let’s simply not go. Let’s group together and agree not buy a single thing this year in Miami—not a print, not a sculpture, not a multiple, not even a signed poster. Let them sell us nothing this year, and we’ll watch with glee as the whole circus dries up and shrinks right down to the size of a pup tent.

If we succeed in stopping them now, we can then enforce some new rules in this game. First and foremost, art fairs should be for collectors only; if you’re not coming to buy art, get the hell out. Second, gallery dinners only, preferably with a few artists and curators sprinkled in to keep it kosher. That means no parties to sell private jets, no jewelry company Champagne cocktails, not even a Ferrari schmoozer and boozer. Third, those “hard to get” early-entrance VIP cards can go only to real collectors who are invited by the galleries. They should not be used like fake velvet ropes in a cheap nightclub to create a rush at the door. Fourth, no more art-fair art. Let’s make sure each gallery brings a few good things to make it worth my while to walk the entire conference center and wear out a perfectly good pair of Tod’s loafers. And, last but not least, let’s not allow any more pre-selling or shopping the goods before the fair, because if the whole place has been cherry picked before I even walk in, I am left wasting my time inspecting a pile of leftover chazerai.

Occupy Art Basel Miami Beach is a new movement designed to correct the ills of global art fairdom once and for all, and to send the dealers, the artists and especially the art-fair companies our message of protest: hell no, we won’t go! We want more quality for our dollar, especially in this crap economy where spending gives us agita. We don’t want to see one gawker, two socialites and three wannabes for every collector in the room. I’ve had it, I’m done, I’m sick of the whole thing and I don’t really care if I miss a party, a cocktail, a flirt or even a good work of art. Occupy Art Basel Miami Beach starts now, so, this year, join me in boycotting the damn thing. Let’s flex our muscles. It’s our collecting dollars fueling this perverse tchotchke bazaar on steroids, and if these people don’t fix their fair, next year we’ll riot, we’ll scream bloody murder and throw rotten tomatoes if we have to. The buck stops here, so join me in staying home, and in saving our money for good art that’s properly exhibited.