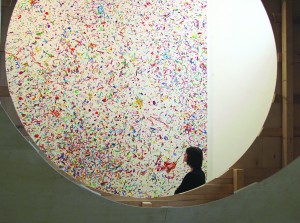 To wind back the clock, Mr. Colen first appeared in about ’05 as one of a small clique of drugged-out, partying downtown art punks who quickly captured the attention of several dealers (Jeffrey Deitch among them) and a few collectors. The group consisted of Dash Snow, their blue-blooded, stylish and charismatic oracle (grandson of a de Menil, art-world royalty); Nate Lowman, a young fashionable hipster-playboy; Ryan McGinley, the tall, good-looking photographer; and Dan Colen the hulking and fully debauched painter. This quartet of downtown bohemian party hounds did not go unnoticed. In 2007, New York magazine featured a piece on “the myth” they had created, and W magazine, buying into it, flew them all to the Bahamas for a photo shoot/weekend bash.

‘Whether the works are gimmicky or great, sparks like these haven’t flown in the art section of The Times for years.’

Fast-forward some time later. Dash Snow died of a drug overdose in August 2009, leaving collectors with little more than a few collages; Ryan McGinley became a hot property as a fashion photographer, and did good shows at Team Gallery; and Nate Lowman established some credibility among curators with his sculptures of found street objects and his jagged paintings of walls pierced by bullet holes.

And then there was Dan Colen.

Dan had been handled for years by L.A. upstart dealer Javier Perez, who kept the work in demand, selling only to collectors who wined him and dined him. Skillful paintings of Disney-esque candles and stripes of encrusted bird shit, as well as gray “boulders” (actually, papier-mâché) covered with graffiti turned the artist into a hit at the 2006 Whitney Biennial. The energetic work let art-world insiders, including Gagosian Gallery, in on the fact that this youngster was hot. The same year, in Berlin, the artist caused an uproar with a poster of his erect penis covered by a Jewish prayer shawl.

At that point, I was a fan of his trompe l’oeuil graffitied boulders, but–though he and the show were well-hung–I didn’t like the poster of his erection. It seemed like a stunt, and still feels that way. This has always been my ambivalence about Dan’s work: It’s really good, but somehow his act puts me off it.

The market, on the other hand, wasn’t bothered in the least. In May 2009, the artist’s painting of smoke rings rising from a candle (Untitled (Blow Me)) sold for $386,500 at a Sotheby’s evening sale. Sex, defiance of authority, profligacy, drugs, all the traditional formula for a certain kind of art-world fame were there, and so was the money.

So the Dan Colen show at Gagosian is a show we’ve been anticipating for years, and with some interesting suspense. On Sept. 9, Carol Vogel published a preopening, two-page New York Times story, where she happily continued to romanticize Mr. Colen’s upstart attitude and irreverent posture. A week later, Times critic Roberta Smith followed with a rebuttal, issuing the young artist a scalding comeuppance. She found the sculptures banal and hollow. She wasn’t much of a fan of the new paintings, either: “The juvenile nastiness that informs everything here at least achieves visual liftoff. It’s not much but it’s something.”

Sparks like these haven’t flown in the art section of The Times for years, and whether the works are gimmicky or great, for a change we’ve had some good controversy. Ms. Smith’s husband, New York magazine writer Jerry Salz, wouldn’t let it go. He dubbed Dan Colen the embodiment of the post crash “spirit of stupidity … at almost any other gallery he’d be ignored.”

It’s important to be somewhat generous in judging the work of a 30-year-old artist on his first major show. Though the Smith-Salz stereo vitriol is great reading, Dan did handle the challenge of the supersize space with some restraint and courage. But there’s no doubt he got into trouble, for a number of reasons. First of all, whatever happened to those great sculptures like the astonishing re-creations of Dash Snow’s trashed apartment? Or those edgy bird-shit paintings? His hand was present and tangible in every piece he made in those days. Years later, he seems to have lost interest in making things that take time and energy.

In the current show, the new paintings look as though they’ve been conceived for mass production. (Ms. Vogel pointed out that Mr. Colen used to produce only three bubble-gum paintings a year until he discovered he could soften the gum with a hair dryer, a somewhat disturbing fact for collectors; now he can churn them out.) Combine that concern with the work’s relatively high prices and it’s hard to step back and judge it solely on its merits.

The debauched and wild Dan Colen felt naïve and fresh; we could forgive his juvenile behavior because he had real promise. But now that he’s sober, clean and well shaven, the new works in the new gallery look poised, and posed, for commercial success.

As a collector, I see two sides of the new work. The sculptures are forgettable. I’m even somewhat put off by the senseless cost of destroying perfectly nice custom-made motorcycles for an installation (I live to ride). The paintings of bubble gum, confetti, dirt and grass, however, are both aesthetically compelling and present ideas; I have no doubt that Dan Colen is a very talented artist. But the audience can’t help but feel that the highly produced and polished all-new Dan Colen would have benefited from a little more time in the trenches, or perhaps fewer studio assistants, fewer new tricks and more of the gritty painting that got our attention in the first place.

The harsh reviews he received were good reading, if undeservedly bitter; still, they were on point in asking the real question: What’s so new about the new generation of artists? Is it fair to expect a fresh paradigm, a different approach? My gut tells me that collectors will one day tire of mass-produced paintings. We’ve already seen enough of those.