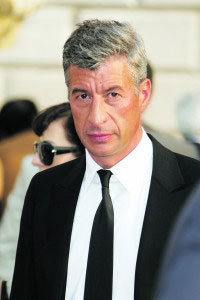 I don’t get Maurizio Cattelan’s work. It’s not that I don’t have a sense of humor. I just have never found him funny. His art, which comprises Madame Tussaud’s-style wax figures (like a barefoot J.F.K. in a coffin) and stuffed animals (pigeons or golden retrievers), has always made me feel like the joke’s on me, or on the chump of a collector duped into buying one of these things for an exorbitant price. Granted his “pope struck by a meteor” (la Nona Ora) and his “praying Hitler” (Him) provided some striking imagery, but what of his tasteless figures of homeless people or that ridiculous squirrel that committed suicide with a mini pistol? That stuff is in poor taste. Why would anyone ever want to own one of those goofy jokes?

I’ve followed the work for a decade, because as a client and friend of Emmanuel Perrotin’s, Mr. Cattelan’s dealer in Paris, I was often offered stuff that nobody would ever want, or so it seemed. First there was the broken bank safe, one that was left over from a robbery. The joke was that since the safe had been broken into, it was worthless, but if I spent my money on it, it became an artwork, and therefore valuable again, perhaps even more valuable than all the money that had been in it in the first place. It seemed like a dumb joke to me, and I watched the gallery try to sell it for years.

After that one failed, the gallery tried to get me interested in a wax figure of a little old lady crouching inside a working refrigerator. I asked Mr. Perrotin what it was supposed to mean, and he told me, “It’s your mother inside a refrigerator. Just imagine you go to the kitchen and open the refrigerator and there’s your mother, inside! Cha-ha-cha.” The look of incredulity on my face must have been apparent, because the dealer then added, “Perhaps if I ask him as a special favor to personalize it for you by making one with a figure of your own mother inside … ?” Little did Emmanuel know that this would be a nightmare for me; he was laughing, but I didn’t find it funny. Then there was the Wrong Gallery, a glass door to a Chelsea gallery that didn’t open and that, in any event, was really no more than a glass door. Between the door and a wall could be seen a single artwork, usually something edgy and fresh. I was once asked if I’d like to help finance this worthy art-world project, to which I thoughtfully responded: “Why?”

The fact that Mr. Cattelan operates in the style of a modern-day Marcel Duchamp has never been lost on me. He traffics in art that is made up of simple ideas, and pranks, created within a specific set of rules. He’s even perpetuated the Duchampian legacy with his pseudo-monastic existence, living in a small, unfurnished, one-bedroom apartment, with no wife or girlfriend or children or anything other than his wacky ideas, a.k.a. his work. You can often spot him riding his bicycle elegantly around the Chelsea galleries, with an oversize bicycle chain wrapped around his narrow waist. Look for the tall wiry Italian with a big nose, eyeing everything going on in the New York art world, as well as everywhere else.

He is not without talents, one of which is his strengths as a curator; the Berlin biennial that he curated in 2006 was one of the best shows I’ve ever seen. There’s also the little-known fact that he is a sizeable collector of art, mainly that of his contemporaries. He is well aware of prices and is as market-savvy as a person can be. Duchamp in turn also acted as an art adviser/dealer in his day, curating shows and advising his favored collectors, the Arensbergs, to buy the work of Constantin Brancusi when no one else was interested. Today you can see those Brancusis in the Philadelphia Museum of Art along with Duchamp’s amazing masterpiece Étant donnés. Mr. Cattelan’s parallel activities are similarly complementary to his overall position in the art world: he makes, he curates, he buys, he sells and he also advises, in his case Greek mega-collector Dakis Joannou.

But why would I care to know so much about this man whose artwork I dismiss? He is the subject of a major career retrospective that opens tomorrow at the Guggenheim, but this wouldn’t be the first time I don’t care for a museum show. And shouldn’t I have better things to do?

Let’s not get ahead of ourselves. Something disturbing happened a few years after Mr. Perrotin showed me the unfunny woman in the fridge. The dealer remarked to me, in an offhand manner, “You know, it’s conceivable that Maurizio could be the greatest artist of our time. Perhaps we don’t see it now.” Sure, Mr. Perrotin may have been making the hard sell for his artist, but his words had an effect on me. I wondered if it was possible that after 10 years of collecting and studying I could miss out on the best art of my time. Was this a risk I could afford to take?

In late 2008, not long after the fall of Lehman Brothers, Mr. Cattelan celebrated the financial crash by floating a face-down, dead Pinnochio in the reflecting pool at the bottom of the Guggenheim museum. This apparent suicide of the fabled character (not coincidentally a lying Italian with a long nose) was a clear metaphor for the death of art, the marionette come to life being the classic metaphor for art, while the artist is symbolized by Geppetto, his “father,” the woodcarver. (The piece is called Daddy Daddy.) What better symbol could there be for a moment when the financial crisis threatened to trigger an art-market crash? I didn’t bother to regret all my missed opportunities, because that was then and this was now. Even with my entire Bloomberg screen flashing blood red for days, I broke down and bought Daddy Daddy.

“All,” the retrospective of Mr. Cattelan’s work that is about to open at the Guggenheim, sounded to me like another flirtation with disaster. In a recent interview, he called Frank Lloyd Wright’s masterpiece an “upside down Tower of Babel” whose goal was to make “artists who enter there become acquainted with Hell.” It just so happens that he’s also simultaneously decided to retire from art-making at the age of 51, much like Duchamp did in 1923 at age 36, the pretext for Mr. Cattelan being his feeling “tired” and his desire to “change occupations” as well as to focus on his new magazine, aptly called Toilet Paper, a series of photos from ads and pictures assembled under his art direction.

So what could he possibly do to avoid his disastrous Guggenheim grand finale? How would he deal with the museum’s gaping atrium, a vortex that has sucked in many an artist’s retrospective and wreaked havoc? He’s solved the problem in an entirely original way, by hanging every artwork he’s ever made in the center atrium of the building, like a giant chandelier. What’s displayed along the walkway that spirals up the building? Nothing. These ramps provide vantage points from which to view the massive new piece. I managed to get in and see it under construction, availing myself of a secret and private tour. I also took illicit pictures of the installation, pictures I promised Nancy Spector, chief curator of the museum and the exhibition’s curator, that I would not publish, so I’ll post them on my website on Thursday.

But what does it look like in person, you wonder? In typical Cattelan fashion, what sounds at first like a one-liner develops into something much more complex, something that involves the art, the architecture, the artist’s past, his present and everything in between. You’ll see from the images that the works are all strung up in this bizarre mobile, one that is at least five stories high. At the top is a large round metal frame from which each piece is suspended on its own individual platform, allowing the viewer to see the whole and also each piece individually.

I immediately said to Mr. Cattelan, “This is much better than I thought,” to which he responded: “That’s a good sign.” I remarked that to suspend all those pieces in midair creates a brand-new composition, a wonderful new work made of old works. He responded, “It’s the right way to see it! Something new made of something old.” Think of it as Duchamp’s Boîte-en-valise—a briefcase-size collection of Duchamp’s entire oeuvre—but with the works in full size and the Guggenheim as the “boîte.” It’s a radical hanging, a new and crazy way to see Mr. Cattelan’s art. He’s broken all the rules again, but thankfully this museum and its curator have given him the platform and the freedom to do it. This is not just another show. It’s an instant piece of art history.

So, do you think I’ve come full circle on Mr. Cattelan? Not quite. It’s true that I no longer dislike him because he’s obnoxious and borderline obscene, or because he’s so dark and creative that he’s unbearable. I had to concede defeat because of the dark and depressing work’s redeeming factor: Mr. Cattelan’s is the kind of humor you don’t want to admit you find funny.

What of the show? Is it funny? Hilarious, unlike anything you’ve ever seen; clearly, it’s the work of someone teetering on the edge of either madness or creative genius. After this show, Mr. Cattelan plans to retire, which means, in theory, that he won’t be making any more work. That leaves him free to buy and sell art as well as to curate. Come to think of it, he did mention in an offhand way that artists’ estates often license images and can authorize posthumous casts and perhaps even create new versions of old work. Is this a way for Maurizio Cattelan the artist to die, while Mr. Cattelan the man still lives and runs his own archive for fun and profit? Who knows? It’s too early to tell, and most likely Mr. Cattelan himself hasn’t decided his next step, but come what may I’ll stay tuned, because it’s guaranteed to be original and exciting, and because I can’t afford not to.