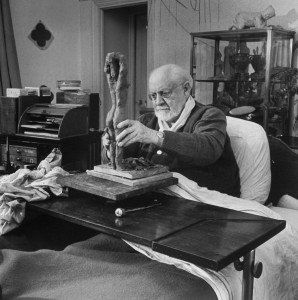 I keep an eye on the Impressionist and Modern art auctions because they’re thought to be an early indicator of the contemporary art sales that follow. But talking to Impressionist and Modern art experts about my penchant for contemporary artists like Maurizio Cattelan or Urs Fischer always leaves me feeling like an insecure fashionista. They’re convinced that “real” art by historic names like Pablo Picasso or Paul Cézanne is not speculative, whereas even the biggest-name living artists could be “here today and gone tomorrow.” These experts stare me down with condescending and judgmental looks that barely conceal their eagerness to say, “I told you so.”

When I learned, however, that a large bronze sculpture of a woman’s back by Henri Matisse, Nu de Dos, 4 État (Back IV), sold for close to $50 million this month, my radar went off. It was time for me to pull out my calculator and try to better understand the Modern art market.

Matisse is known to have made four different versions of the famous Backs from 1909 to 1930. Each was conceived in an edition of 12. So if you add up the 48 Backs and multiply by $48.8 million, the value of the entire body is a whopping $2.35 billion.

Of course, that’s not how things really work: Prices like this occur when most of the works are already locked up in museums. And many of the existing Backs are in full sets of four at major museums like the Tate, the Museum of Fine Arts Houston and, above all, the Museum of Modern Art.

But the story gets more complicated the more we learn. Of the 48 works in the series, only five examples were made during the artist’s lifetime (MoMA owns three of the five). Matisse produced three editions of Back #1, and a single edition each of #3 and #4. But he never produced #2. In total, 43 of the 48 Matisse Backs that exist are posthumous casts, works the artist never saw or validated with his own eyes, a shocking realization for a contemporary collector like me.

I can’t imagine a posthumous cast of a Jeff Koons “Celebration”-series sculpture, or of any living artist’s work (Leftover John Chamberlain crushed car parts? An extra Tom Sachs Crying Hello Kitty?) for that matter. Of course, the art world is ruled by supply and demand, so maybe this will all feel perfectly kosher sometime around 2060, when the artist is no longer around. Especially if the beneficiaries of his estate are hungry for cash.

Truth be told, posthumous casts are nothing new. All of Edgar Degas’ sculptures were cast after his death, and there is evidence that he never intended them to be produced in bronze at all. But that didn’t stop someone in 2009 from paying $19 million for La petite danseuse, the famous ballerina sculpture made in wax in 1881 but cast in bronze in 1922, five years after Degas’ death and possibly against his will.

The Matisse Back that soared at Christie’s was not cast until 1978, long after his death in 1954. “That was a terrible year for an artist to die, since Europe was still recovering from the war and casting the bronzes was an expensive process,” Daniella Luxembourg, a veteran Modern art expert (and my wife’s business partner), explained.

But I can’t help wondering if the collector who finally commissioned this Matisse bronze in 1978 was thinking about all the complicated issues involved. Imagine what art that collector might have bought with that Matisse money from artists who were still breathing, like Donald Judd, Andy Warhol or Roy Lichtenstein. I can just imagine shopping back then for my double car crash, a full-size Judd stack and a great female crying portrait, with enough money left over to live on the beach in Brazil. Today, my art stash would appraise at over $200 million.

The 1978 collector might have done even better buying a life-time cast by Alberto Giacometti, now among the most sought-after trophies–though posthumous casts of the same artist sell for roughly half as much. This is not the case with the Matisse Backs, where there are only posthumous editions, and virtually no sellers. It’s the perfect scenario for setting high prices.

I’ve read that when an elderly Matisse was going over his life with the great art historian and inaugural director of MoMA, Alfred Barr, the artist mentioned only Backs #1, #3 and #4. Somehow, Back #2, the one he never cast, had been forgotten in a Nice warehouse. I wonder if he ever intended to cast it at all.

Whether it’s Modern or contemporary, art tastes will fluctuate wildly over time as reputations shrink or swell. Works of art can fall in and out of favor during and well after the artist’s lifetime. Our notions of what is “real,” “historic” or “iconic” (the art world’s most overused adjective) are in a state of constant flux. As unsettling as this may seem to most collectors, everything in art history is subject to being reviewed, revisited and–perhaps posthumously–recast.