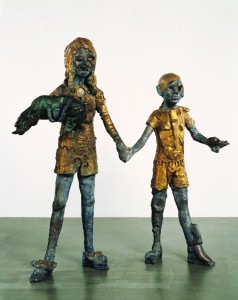 “It’s the best game you can play in the world,” said Jonathan Meese, the sculptor whose show at the Museum of Contemporary Art in Miami was one of the hits of the huge Art Basel Miami Beach week. Mr. Meese, talking to me about art, added, “I believe in the total power of art, and I think it will one day rule the world.”

It says a lot about this year’s Art Basel Miami Beach extravaganza that my double espressos with him were one of the more sober moments of my stay. This global art shopping mall grew particularly unwieldy this year, more frantic, more packed with parties and less about art than ever.

Pawel Althamer is one of the best younger sculptors anywhere. But the booth was sold out by the time I could drag my own alcohol- and nicotine-saturated corpse over there.

The artist himself has little use for art fairs (there were about 20 of them in Miami last week). “They are nothing for an artist; they’re only for dealers and buyers,” he said. But he spoke passionately about art itself. “It is a ticket to another world, which is better than all the worlds we know. If you have a collection which is precise, sharp and radical, then you show that you have vision. People need to understand that this, art, can make you happy.”

And last week, art made a whole lot of people happy.

The art world often gets accused, unfairly, of being just one big party, but it sure looked like one in Miami. I know they don’t come for the art, because over half the people I bumped into wouldn’t know a Picasso from a Dana Schutz, and don’t care to. The foot-high pile of invitations and Evites on my desk is what they’re into, and if they want to get away from the cold and booze it up for free, I suppose I shouldn’t blame them. Miami is, after all, a great party town.

It used to frustrate me that so many of these revelers were not remotely interested in collecting, but this year, I decided to go with the flow. I went light on the art, and really focused on the dinners, cocktails and a thousand air kisses, the stuff that Art Basel Miami Beach does better than anywhere. People kept asking me if I saw “the main fair,” the Asian art fair, telling me that they loved the NADA fair, as well as the revamped design fair. Come on, I’m seriously hung over, overstimulated and overfed–you can’t expect me to keep up with all that, I told my editor. It’s just not fair! I wanted to shmooze and be shmoozed.

Though I did catch a glimpse of a few superb Cy Twomblys (priced up to $12 million at Acquavella Gallery) and John Chamberlains at the fair entrance, and I regret that I arrived too late to buy one of the 10 fantastic new Pawel Althamer corpse sculptures (about 70,000 euros each) at the Neugerriemschneider booth. There is no doubt in my mind that he is one of the best younger sculptors anywhere. But the booth was sold out by the time I could drag my own alcohol- and nicotine-saturated corpse over there.

The art fair is now more than ever a catalyst and a draw for a whole new kind of marketing for high-net-worth clients. Parties are held by banks, jewelry, fashion and car companies, all stuff that has nothing to do with art. Thinking back on why and how it all happened, I still don’t understand the phenomenon. I can only explain it in the form of a biblical passage: In the beginning, there was “art,” then the market grew out of the art and created the “art market.” As the art market grew, so did the parties and the events, what we call the “marketing of art.” But now that everyone has jumped on the bandwagon, we’re reached the age of the “art of marketing,” the marketing of all kinds of luxury. How, after almost 10 years, Art Basel Miami Beach turned chiefly into a marketing circus I’m not quite sure, but it is party-central, and the growing list of things going on would fill a small phone book.

In order to maintain some self-respect, I visited shows like the one at the elegant De La Cruz Foundation. Rosa de La Cruz had chosen this year to exhibit younger artists who are practicing what can be called “new abstraction,” with works from Sterling Ruby, Tauba Auerbach, Kelley Walker, Seth Price and some well-chosen lesser-known artists.

It was interesting to evaluate how strong this movement has become, and how it conflicts with the young artists the Rubells were showing.

They had sculptures and paintings by Aaron Curry and Mathew Day Jackson, as well as a monumental bronze by trendy hot Thomas Houseago. Combining this with a show of ’80s artists chosen by Jason Rubell at age 13, it really showed how different Miami collectors can have a totally different view of what’s good today.

But, mostly, there were parties.

Sea trials of Marc Newson’s cool boat at an André Balazs party, and a dinner hosted by Larry Gagosian, Wendi Murdoch and Dasha Zhukova at Mr. Chow’s. The next night Vanity Fair sponsored a party for photographer Bruce Weber’s Haiti pictures, but there was simultaneously a Jay Jopling party at the all-new Soho Beach House. Aby Rosen threw a hot dinner at his W hotel the same night that Julian Schnabel screened his wonderful new movie Miral, a biographical story of his girlfriend’s Rula Jebreal’s life growing up in a Palestinian orphanage in East Jerusalem. The film was followed by an impressive dinner in the new Frank Gehry performing arts center, sponsored by Maybach, the Mercedes Benz mega-limousine. The guest of honor was Sean Penn and his Haitian relief organization. Mr. Schnabel generously donated paintings, which sold well, and museum director Jeffrey Deitch announced to much applause that Mr. Schnabel will have a retrospective at L.A. MoCA in 2012. People were into some very late nights, with after-party stops at Wall or Paris’ hottest nightclub Le Baron, which was transplanted to the Delano for a debauched and glorious four-night stint.

And in the middle of this excitement, Benedikt Taschen opened a great new Taschen bookstore designed by Philippe Starck, and held a book signing for their latest release, Collecting Design, the second book by yours truly.

Was it really fun? I’m totally partied out, and indeed I had fun, a special Miami variety of absurd revelry. If you can’t beat ‘em, join ‘em, I figured, so I did my tequila shots, danced on tables and lost my credit card.

We’ll see you there next year.