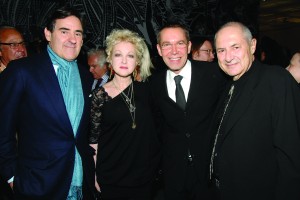 Last week, the New Museum opened its new show, “Skin Fruit: Selections from the Dakis Joannou Collection,” curated by mega-art-star Jeff Koons. This show has prompted a huge amount of controversy and suspicion, from The New York Times to The Village Voice, and all the blogs in between.

Some journalists feel safe sounding prudish, cautious and wary of shows that are fraught with art market implications. Like it or not, there is no arguing the fact that some of the best contemporary collections have always been in private hands, and in my view, it’s high time the public gets to see them.

It is interesting to look at all the bad press and the barrage of criticism the New Museum has received and to use these views to expose some of the prejudices, mistaken assumptions and hypocrisy prevalent in much of the art world today. What follows is a short summary of all the alleged problems with the show and a rebuttal that should put most of them to rest.

The unethical and improper nature of a public museum showing a private collection.

This is the naïve claim of someone who still believes in Santa Claus and doesn’t yet understand why parents need to go to FAO Schwarz before the holidays. Most museums in this country are sponsored by private donations, and most shows include some component of private giving. Curators who need funding for a show will naturally go to the lenders, and they are expected to contribute to the expenses. After all, their paintings are hanging on the wall and getting prime exposure; shouldn’t they help foot the bill?

In the Contemporary Art world, this situation is both magnified and multiplied. We have witnessed an art market that has radically changed and accelerated in the past 10 years. Most museums do not allocate a sufficient budget, nor are their curatorial committees equipped to keep up with new artists and new prices. Curators and acquisition committees tend to act slowly and with prudence. This means that they are by nature bureaucratic: They choose late and pay slow. Neither of these attributes endears them to dealers who need to get paid and install the next show, or to artists who want money and need to move on in their career. That’s why much of the best contemporary art ends up in private hands. A great collection requires an entrepreneurial mind-set, a risk-taker with vision and enough money to act quickly and seize opportunities.

Additional thunder has been drained from the museums, with the galleries increasingly doing many of the best shows in town. Shows of Picasso and Piero Manzoni (Acquavella, Gagosian), as well as those of Koons, Alighiero e Boetti and Cindy Sherman (L+M, Gladstone, Skarstedt), have put gallery shows in direct competition with museums. Gallerists know the material and can act quickly; they are committed and don’t need to pander to broad and politically correct guidelines. Recently, one of these very dealers became the director of the Los Angeles Museum of Contemporary Art (none other than Jeffrey Deitch, Dakis’ adviser), thus further blurring the hard lines between dealers and curators, galleries and museums. After all, museums are galleries, too, in a way. They don’t sell their paintings, but they do sell tickets and books, and they are competing for our eyes and our dollars.

The collector will gain economically from the show.

There is no doubt that museum provenance is a nice calling card for any work of art. The first thing that any serious collector wants to know when they hear of an upcoming show is whether their own works will be included. But why do critics get offended if a painting in the show gains value, and why does no one ever talk about the museum shows that diminish art values? Many mid-career retrospectives end up giving an artist’s market a big hangover-collectors feel they’ve seen and done it, and the best work is over, so the work declines. Also, let’s not forget that there are many shows where the work can look bad or plain indifferent. As far as which ones are now worth more and which are worth less, Richard Armstrong of the Guggenheim recently said, “… [I]f the works become more valuable in the process, that doesn’t hurt anyone.”

The propriety of allowing a museum trustee to exhibit his collection and of allowing him to choose his closest artist as curator.

There have been a number of claims that the New Museum has abused certain cozy relationships between its curators, certain dealers and certain artists. The litmus test is whether the shows were good-not who is friends with whom. The contemporary art world is a small place, and it is inevitable that curators are closer to some dealer programs than others. Collectors also tend to favor some galleries over others, but why this should prohibit a trustee from exhibiting his collection to the public makes little sense. It goes back to an idealistic and unrealistic assumption that rich people should sit on museum boards simply to provide money. The truth is, in America, once you accept someone’s money, you accept the strings attached, you accept that curators need to keep the board happy, and keep the money flowing for everyone’s best interest. In the case of Dakis, he has done it all right: He gave, he supported, he lends. We need more collectors like him.

The issue of whether Mr. Joannou is underwriting the exhibition.

The New Museum has reportedly said that Dakis is not underwriting the show. This position is a type of public-relations apology to assuage the anticipated criticism of insider dealing and self-promotion. But why feel guilty here? If Saatchi had paid for the “Sensation” show back in 1997, would that have made it better or worse? And today, who cares? There is nothing the matter with Dakis’ financial support; it is helping a museum that needs it. Nothing to be sorry for here. No more guilt trips, please.

This represents a “dizzyingly insular circle of art world insiders.”

The prior Urs Fischer show at the museum was curated by Massimiliano Gioni, who is close to Maurizio Cattelan, who is close to Dakis, who is close to Jeff Koons. Both Dakis and Mr. Koons are close to Jeffrey Deitch. Is this a problem? Or is this all part of some cabal? If one is offended by power cliques, get out of the art world-it’s full of them. Every institution in the world has its gate keepers, and the art world, as Glenn Lowry (director of MoMA) once said to me, “is not a democracy.” The curators at the New Museum represent an opinion and a viewpoint that is specific to them; they can be right or wrong. Criticize them (wrongly) for putting on a bad or gimmicky show, perhaps, but not for who their friends are.

It’s wrong of museums to hang works that are potentially for sale.

The New Museum’s policy specifically prohibits trustees lending a work of art if they are planning to sell it. Most museums do not like to hang things that are obviously for sale, but realistically, there is no way of knowing whether a lender will sell in the future. On the other hand, this issue is not only reserved to collectors; when I see a show with too many works that are “collection of the artist,” I can’t help but think that the artist welcomes cash offers. Truth be told, who is harmed if a work changes hands during a museum show? How is the public harmed in any way? The core assumption is that an individual is personally benefiting from a sale made in an institution that serves the public good. But if you put jealousies and sour grapes aside, who is harmed here? As long as the public gets a great show, there is no foul.

Everyone in the contemporary art world has an opinion, which is why we are energized and enlightened by the art of our time. Can New York generously welcome this exciting collection and Jeff Koons’ idiosyncratic viewpoints? So far, despite the bad press, the show has been packed. The New Museum had the courage to accept today’s art world as it is, and to put on the show we’ve wanted to see for years. We should congratulate and encourage them to do it again and hope that other museums will follow their lead. As an audience, we want to see the best works, the best collections and the best shows, and we’re not concerned with archaic rules of propriety or the paralyzing implications of critics’ forensic art appraisals.