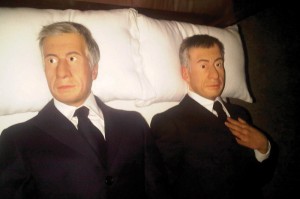 In the art world, summer is the time to make the pilgrimage: Events in Europe, public and private, afford much to marvel at, to think about-and, possibly, to buy.

FROM BASEL: THE Swiss have a few things to teach us about art collecting, given their appetite for it and the superb way they exhibit their works. Case in point is the Schaulager. This private museum, funded by the Hoffman-La Roche family, is my personal favorite private museum building anywhere. Its Herzog and de Meuron structure is elegant and brutal, masculine and sensual, and the foundation exhibits mostly what it owns-the ultimate collector dream.

Indeed, the most interesting art dialogue going on in Basel last month wasn’t at the huge art fair but at the wonderful Schaulager and Beyeler museums, where Matthew Barney and Jean-Michel Basquiat had big-budget blockbuster shows. Maja Oeri, the Hoffman family member in charge at the Schaulager, had done a huge Barney deal for the exhibition, buying up an entire archive of his “drawing restraint” works, and gifting half to the Museum of Modern Art. But in the inimitable manner of the artist, this show of Barney demonstrated everything but restraint. The exhibition was massive, with huge melting white plastic sculptures including the big melted deck of an entire whaling ship. Several rooms of drawings and videos were interspersed with Albrecht Durer prints. In Mr. Barney’s work, I find less Durer and much more Dali, specifically Salvador Dali’s famous 1938 installation “mannequin rotting in a taxicab.” In my opinion, Mr. Barney looks more like a surrealist than any Old Master, so sprinkling in a few Durer prints just makes the show bigger, and harder to digest.

The genius of this 42-year-old man is undeniable, but the huge production of films, performances, drawings and sculptures by an artist who maintains an inaccessible holier-than-thou persona leaves a collector like me feeling a bit bloated. Isn’t it time for Mr. Barney’s handlers to bring him down from his ivory tower and allow him to mingle freely, and with confidence in his art stardom? Until then, the whole thing feels like work we must bow to; rituals of futuristic Minoan, Trojan or even Shinto gods that Mr. Barney creates in his mind, but never gives us the chance to really believe in. By the end of the show, I’d experienced my own auto-da-fé: I’m a solid believer, but I had no choice in the matter.

ELSEWHERE IN BASEL, the Beyeler Foundation itself is the most tasteful and special place, designed by Renzo Piano before he became the go-to guy for every museum on American soil. In the past few years, the Beyeler has indulged us with fabulous shows of Fernand Leger, Alberto Giacometti and Edvard Munch. This year, Sam Keller, ex-Basel fair director and now the Beyeler director, brought in the first big show of his new regime: Basquiat. The show was a way to move the institution forward and closer to the art of today, and a way to open the door to the museum’s future, since founder Ernst Beyeler himself died in February of this year.

The Basquiat “cartel,” a loose-knit network of dealers and collectors, most of whom were there for Art Basel and who own many of the works, began to trash the show immediately. The dis: It was “overhung” and didn’t properly represent the hierarchy of the great works (theirs) as compared to the not-so-great works (everybody else’s).

In the Swiss manner, the curators had precisely selected, ordered and categorized the works by year, size and medium, and had put all the works on paper together. So it was perhaps a bit overhung, too packed, and somehow the pristine white walls of Renzo Piano perfection were struggling with the colorful, dark, sometimes violent paintings.

Spotting Francesco Clemente at the private opening, I asked him whether he liked the show and whether seeing the retrospective of an artist he knew so well made him sad. He said he was melancholy in his reminiscence but that he actually liked the overhanging and wished, if anything, that the show had been more chaotic-more like the man himself, less “Picasso-esque.” Basquiat’s short life was chaotic and wild, itself a creative performance, and his works were a part of all that. But this blockbuster show was a big move for the Beyeler, and I decided to enjoy it rather than find fault, since I probably will never see a better one.

THE HAUSER AND Wirth Gallery offered a private charter from Basel to Milan, where the Trussardi foundation was sponsoring a Paul McCarthy exhibition titled “Pig Island.” The Trussardi foundation and its curator, Massimiliano Gioni, have done several big-vision, challenging shows, from Maurizio Cattelan’s controversial hanging of three child mannequins from a tree to Pawel Altheimer’s 80-foot helium balloon in the shape of his naked body. This time, on view was a McCarthy installation of a large portion of his studio, a Styrofoam island covered in remnants of sculpture, broken pieces and tools, books, magazines and junk food, a diorama of an artist’s mind, frozen in time. The artist said to me, of it, “I know that at some point I stopped.”

I had a hard time understanding it, this pile of unfinished and broken works, mixed with files, dust and empty Kentucky Fried Chicken buckets. It’s the remnants of his artistic process viewed as a performance. This type of project is for the hard-core believers: Nothing to buy or sell here, the whole installation just sits and collects dust. It was, at least, fearless.

IN ATHENS, COLLECTOR Dakis Joannou had a new installation in his Deste foundation, which he curated himself. (Unlike the “Skin Fruit” show of his collection recently on view at the New Museum, and curated by Jeff Koons.) He showed a wide range of works and permanent installations, which included Jeff Koons’ Moon, which looked fantastic in silver; Urs Fischer’s metal cast of a big black hole, which also looked great from above and below; and Maurizio Cattelan’s self-portrait, in which “he” breaks through a museum floor and peeks out (an edition of this same piece made over $7 million at auction last May). The new show also included some newer talent. There was a full room of colorful Josh Smith paintings, two large monochromatic Barnaby Furnas paintings, a few Andro Wekua’s and a leather Pawel Althamer self-portrait, among other good works.

ON THE ISLAND of Hydra, Dakis Joannou exhibited a new work by Mr. Cattelan in an abandoned slaughterhouse perched on a cliff overlooking the ocean. The untitled piece was a miniature bed about four and a half feet in length, and in it were two full-figure half-size sculptures of the artist, perfectly dressed in matching little black suits and perfect little black laced-up shoes. (One mini-Maurizio had slightly longer and grayer hair.) This extremely strange self-portrait seemed a fitting way to end my tour-the artist in bed, wedded to only himself. Were they dead bodies, as in the viewing at a funeral, or a comment on the artist’s inability to relate to anyone else? This piece was powerful in a disturbing way.

As I was leaving the island the next day, I bumped into the artist in the marina and asked if he was on his way back from revisiting his dual images. He quipped, “Why would I do that? I hate my work!” As if art speaks for itself and there was nothing more to say. In the harbor of this beautiful Greek island, with the sun shining, the bright blue sea glimmering, a mild hangover lingering, for a moment, I felt I had the answer I was looking for.